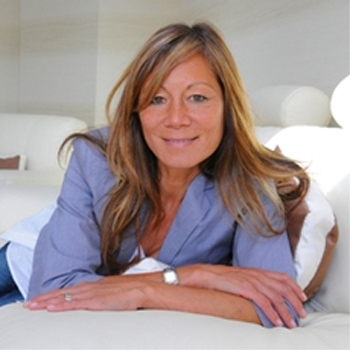 Anna Ryder Richardson was born in South Wales but was adopted when she was very young and went to live in Surrey.
She has variously been a model, fitness instructor, children's designer and television personality, and is married with a family.
Her design career started with children's bedrooms, which led to her appearing on 'Changing Rooms' but her creative talents have been put to giving makeovers to clubs, hotels and private houses too.
However, in 2005, she and her family developed the idea of having their own wildlife park which led them to purchase Manor Park near Tenby in South Wales.  Anna believes that in caring for wildlife and protecting some species, she is making a positive contribution to the world and creating a wonderful environment for her children to grow up in and she and her family also live in the park.
Since she made her 'Changing Rooms' debut back in 1998, Anna has become an interior design star and has appeared in several other home-design shows for the BBC including 'House Invaders' and 'Staying Put'.
In 2006, she was a celebrity showjumper in the BBC's Sport Relief event 'Only Fools on Horses.' She was a hidden celebrity on the CBBC show 'Hider in the House' and
was the sixth person to leave the jungle in ITV's 2007 'I'm a Celebrity... Get Me Out of Here!'  She appeared alongside fellow I'm a Celebrity... Get Me Out of Here! contestant and eventual winner, Christopher Biggins in a celebrity version of ITV's 'Who Wants to be a Millionaire?' in which the pair shared a £50,000 prize for their chosen charities.
Read More