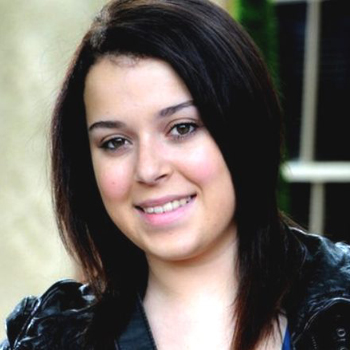 Dani Harmer is one of the biggest stars of children's television in BBC history having played the lead role of CBBC‘s successful The Story of Tracy Beaker and Tracy Beaker Returns.
Dani won the 2010 Children's BAFTA for Best Drama, and was also nominated for her performance as Tracy Beaker in its various incarnations.  Dani was nominated for a Welsh BAFTA for Best Actress in Tracy Beaker's Movie of Me, and Dani's House, her CBBC show also received a 2009 Children's BAFTA nomination.  Also in 2012 “Dani‘s Castle saw Dani taking on her first producing role at the age of 24.
Born in Berkshire in 1989, Dani started her acting career aged six in the Pete Townshend rock musical Tommy and went on to play July in the national tour of Annie. She landed the role of Tracy Beaker at the age of 12, and played the character for six successful series following which came her own sitcom Dani's House.
Dani has also had roles in several high profile programmes including After You've Gone ( BBC1); Young Jo Brand in Little Crackers for Sky; Trial and Retribution, My Family, Pie in the Sky, The 10th Kingdom, Beast, Touch Me, I'm Karen Taylor, Beep Beep in The Beeps and the pilot for Coming of Age. She was one of the presenters in the 2006 Saturday morning show, Mighty Truck of Stuff.
One of the highlights of her career so far was performing at the Queen's 80th Birthday bash - in the reprised role of Tracy Beaker.
Early 2012 Dani joined the line up for Let's Dance for Sports Relief on BBC 1 reaching the final.
In addition to her numerous screen credits, Dani is in much demand for panto and has played Peter Pan, Dorothy in The Wizard of Oz, Spirit of the Belles in Dick Whittington and Princess Tamar in Jack & The Beanstalk.
In 2013 Dani appeared in Strictly Come Dancing reaching the final. She went on to The National UK 40th Anniversary Tour of the cult stage musical Rocky Horror Show in the role of Janet.
In September 2013 Dani opened The Dani Harmer Academy of Performing Arts in Ascot.
"Dani was brilliant!  She arrived early, was easy to work with, very relaxed and got great interaction with the audience she was a pleasure to work with and we would love to work with her again.  Bernard Matthews Youth Awards - October 2015