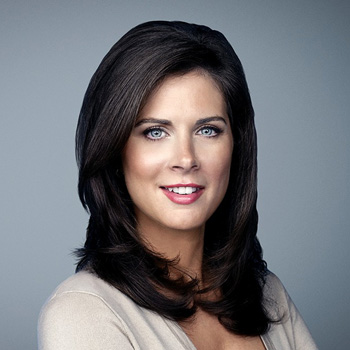 American financial news anchor and presenter Erin Burnett is focused on global business reporting. She is currently the anchor of CNN's 'Erin Burnett OutFront'.
From 2005 - 2011 she co-anchored CNBC's 'Squawk on the Street' programme and also hosted CNBC's 'Street Signs'. She has featured on NBC's 'Meet the Press', 'Today', MSNBC's 'Morning Joe', and NBC Nightly News, as well as making occasional appearances on 'The Apprentice' as an advisor to Donald Trump. She is a member of the Council on Foreign Relations.
Erin has fronted a number of documentaries filmed outside the United States, including 'India Rising: The New Empire', 'The Russian Gamble', and 'Dollars & Danger: Africa, The Final Investment Frontier'. She has focused extensively on the Middle East, reporting live from across the region and hosting topical documentaries including: 'On Assignment: Iraq', 'Big Money & the Middle East', 'City of Money and Mystery' and 'The Forbidden Zone'.

Born and raised in Mardela Springs, Maryland, Erin is the youngest daughter of a corporate attorney. She attended Williams College in Williamstown, Massachusetts, studying political science and economics, and graduated with a BA in political economy.

Erin began her career as a financial analyst for Goldman Sachs in their investment banking division, where she worked on mergers and acquisitions and corporate finance. Whilst working as an investment-banking analyst, she was offered a job at CNN as a writer and booker for CNN's 'Moneyline'.

From CNN, she moved to Citigroup, where she served as vice president for Citigroup/CitiMedia, and was responsible for all anchoring of the Citigroup online financial news network. Then in 2003 she joined Bloomberg Television, where she was the anchor of Bloomberg on the Markets.

Burnett has hosted her live shows from five different continents and all of the BRICs. She's also filed special reports from Iraq, Libya, Egypt, and the Democratic Republic of the Congo.