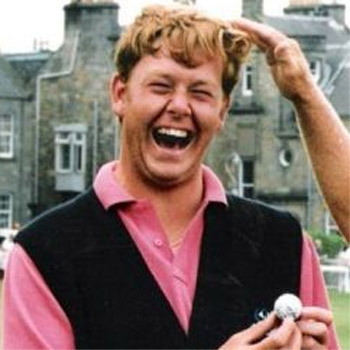 Scottish golfer Gordon Sherry uses his career experience to entertain as he talks about his journey to the top, with anecdotes about many of the stars he played alongside  Woods, Watson, Nicklaus, Palmer, Player and many more. Mixing facts with humour, Gordon has become one of the best golfing after-dinner speakers on the circuit.

His own career, both amateur and professional, has had more than its fair share of ups and downs and his insight into the world of golf is as fascinating as it is entertaining.

His win in The Amateur Championship gave Sherry the opportunity to play in both The Open Championship and the U.S. Masters, two of golf's major championships. He gained significant attention during his participation in the 1995 Open which was played at St Andrews, starting when he made a hole in one during a practice round playing alongside Jack Nicklaus and Tom Watson. Although he finished behind Steve Webster in the race for the Silver Medal as the lowest scoring amateur, he collected £1 from fellow amateur Tiger Woods, with whom he had a friendly wager over who would achieve the highest-placed finish.

After appearing in the U.S. Masters in April 1996, Sherry turned professional. But despite several visits to qualifying school he never won his European Tour card. As a result he had to rely mostly on sponsors invitations in order to compete. He never managed to win a tour event although he did win the Mauritius Open in 1997.

Sherry last attempted to qualify for the European Tour in 2002, and now splits his time between minor tournaments on the Scottish Tartan Tour and coaching. He has also been involved with Prodream USA, a consultancy assisting British golfers to obtain scholarships to American universities.