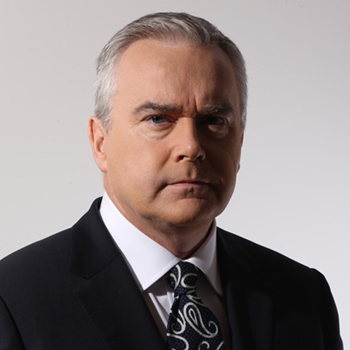 He joined the BBC over twenty years ago, and has presented a wide range of programmes, including Newsnight, Panorama, and the 6 O' Clock News - and has co-hosted two General Election programmes on Radio 4.

Huw is the BBC's voice at Trooping the Colour, the Festival of Remembrance, and the State Opening of Parliament. He hosted the BBC's major coverage of death of Pope John Paul, and the election of Pope Benedict. In 2004, he anchored the coverage of the 60th Anniversary of D-Day. In 2005 and 2006, the Ten O' Clock team received two prestigious awards from BAFTA, and one from the Royal Television Society. Most recently Huw anchored the BBC coverage of the 2008 US Elections and the historic inauguration of Barack Obama in 2009.

Huw spent over a decade reporting politics at Westminster, including a period as Chief Political Correspondent. He has also presented a range of programmes on history and classical music on BBC Four, BBC Two, Radio 3, Radio 4 and S4C. His recent projects have included major documentaries on David Lloyd George, William Gladstone and Benjamin Disraeli for BBC television.

He is an enthusiastic pianist and organist, and has enjoyed a long association with the renowned Cardiff Singer of the World competition on BBC-2. He has also hosted coverage of the Proms from the Royal Albert Hall.

Huw is an very experienced conference facilitator and compere, and has hosted many awards and corporate events.