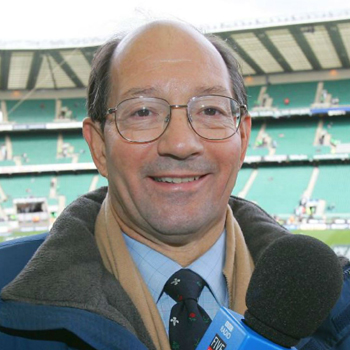 For his day job Ian Robertson was the BBC Rugby Correspondent until retiring in 2018; covering both Radio and TV. In the evening he is a very amusing, entertaining and highly articulate after-dinner speaker,

Ian's rugby career ended with a bad knee injury at the age of 25 but by that time he had won "Blues" at both Aberdeen University and Cambridge University, had played for London Scottish and the Barbarians and had won 8 international caps for Scotland. he was vice-captain of Scotland.

He joined the BBC as a rugby commentator in 1972 and has covered almost all major matches all over the world for the past 20 years. He was Rugby Correspondent for the Sunday Times between 1980 and 1983 but then returned to the microphone to be BBC's Rugby Correspondent in 1983. He appeared regularly on television as a member of the "Rugby Special" team on BBC 2 and also presented the rugby previews and features on Grandstand on BBC 1 before all major internationals, and provided the highly acclaimed commentary for England's victory in the 2003 Rugby World Cup.

A prolific writer he is author or co-author of over 20 books including several best sellers - with Gareth Edwards, Bill Beaumont and Andy Irvine and he helped with the official biography of the actor Richard Burton. This book was best seller in over a dozen countries,

Throughout the 1980s he worked on a Celebrity Road Show which covered the length and breadth of Britain and in the course of nine years he appeared regularly as compere or quiz master with sporting celebrities like Denis Law, Emlyn Hughes, Geoff Boycott and Willie Carson. In the summer he masquerades as an expert on horse racing for the BBC and he has had numerous shares in a succession of very slow horses lacking any sort of ambition.

Over the last 20 years he has reported on most sports at one time or another and he appears 2 or 3 times a month on the after-dinner circuit with a fund of anecdotes covering a very wide range of sports.

Although happy to accept any challenge, he specialises in Sportsmen's Dinners, golf days (he has a very competitive handicap of 16), dinners and conferences for the business world.