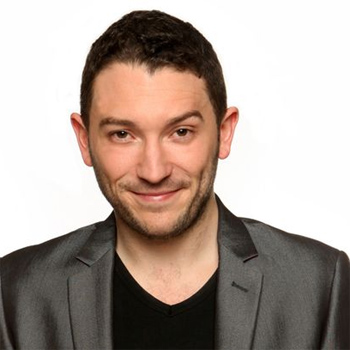 Jon is one of the most in-demand young artists on the UK comedy circuit today and currently hosts the Sunday mid-morning show on BBC6 Music where his unique presenting style has won him thousands of loyal weekly listeners.
A regular on the stand-up circuit, Jon's first gig was in 2003 where he won his heat of the BBC New Comedy Talent Search. After completing a 60 date UK with Alan Carr in 2006, Jon went on to be nominated for a prestigious If.Comedy award for Best Newcomer for his show Spatula Pad at the 2007 Edinburgh Fringe Festival. This was followed in 2008 with a successful Edinburgh run of his second solo show, Dogmatic. His recent TV and radio appearances include: Michael McIntyre's Comedy Roadshow (BBC ONE), The Comedy Store (Paramount), Comedy Shuffle (BBC3) and Out To Lunch (BBC Radio 2).
"Richardson is an OCD-afflicted, grumpy young man, who can spin a brilliant routine and could well be the best comic of his generation"  The Herald
Read More