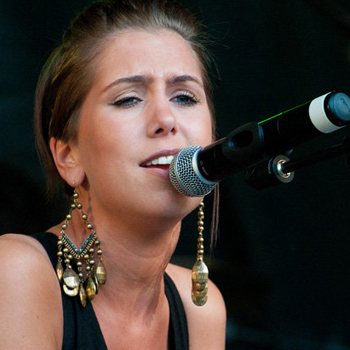 Katy Shotter, aka Kats, is a singer, musician and songwriter. After being classically trained on the piano  aged four, music was the only thing that Katy knew she wanted to do in her life. She taught herself how to sing in her bedroom by imitating greats such as Mariah, Whitney, Stevie and even Judy Garland (!) Her influences range from Ray Charles, Alicia Keys, Amy Winehouse to Erykha Badu, and she is constantly being inspired by new and old artists.
Her first big break into the industry was when she got picked to be in the final 8 for a reality show based in Houston, on Mathew Knowles' bootcamp (where he brought Destinys Child to fame). Katy went on to win the affections of Mathew and other big names, and won the show, resulting in a recording contract with Sony BMG, a management contract with Mathew, and the opportunity to support Beyonce Knowles on her UK tour.
The next year was a whirlwind of recording sessions and interviews, and in June 2007, Katy supported Beyonce, first in Spain, then the UK. The tour went so well, that she got asked to join her in America and Canada for the next year. All Katy used was a keyboard and her voice, and that was enough to get  recognition. She also supported Beyonce again for her special New Year show in Las Vegas 2008.
After parting company with her record label for reasons beyond her control, Katy spent the next year writing, writing and more writing! After all, she had a lot to talk about! She got her own 8 piece band together and wanted to recreate the old performance techniques of greats such as James Brown and Michael Jackson, by putting on a real show. Katy and the Shotters are now preparing for a showdown of gigs and Kats is now finally ready for the world.
Typical set list:
1. Deja vou - Beyonce
2. Fever - Peggy Lee
3. Work it out - Beyonce
4. Video - Indie Arie
5. F*** You - Cee-Lo Green
6. Tightrope - Janelle Monae
7. American Boy - Estelle
8. Golden - Jill Scott
9. Blame it on the Boogie - Jackson 5
10. I Want You Back - Jackson 5
11. White Knuckle Ride - Jamiriqua
12. I Wish - Stevie Wonder
13. Use Somebody - Kings of Leon
14. Valerie - Amy Winehouse
15. Laser gun - my own!!
16. Sex on Fire - Kings of Leon
17. What's Going On - Marvin Gaye
"Our event went very well thank you and both bands were excellent. The Jonty Fisher Trio set up on time and went about their business in a very professional manner and with the minimum of fuss. Katy Shotter's performance was brilliant and gave us a good hour with some of our guests even getting up for a dance or two! No complaints from us and wouldn't hesitate using them again in the future."  BIBA RSA Dinner - May 2015
"Katy and the band were superb and the ambience was perfect, thank you."  Marketing Services Director, Eventia - July 2012

Hugely talented singer, songwriter who has supported Beyonce and Jools Holland. Wide repertoire including the classics and more modern numbers. Comes with a 7 piece band.