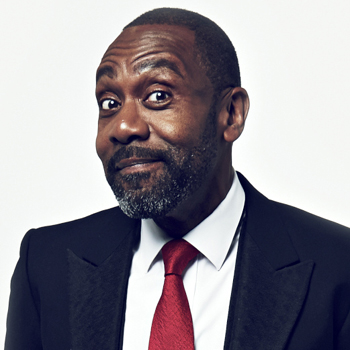 Lenny Henry, CBE (born Lenny Hinton in Dudley, West Midlands) is a comedian and entertainer, whose family moved to the UK from Jamaica in the 1950s.

Henry studied at Bluecoat Secondary Modern School, WR Tewson School, and Preston College, and has since obtained a degree in English literature from the Open University.

His earliest TV appearances were on the New Faces TV talent show in the 1970s where he was a repeat winner. His formative years were in working men's clubs where his unique act - a young black man impersonating white characters such as Frank Spencer from Some Mothers Do 'Ave 'Em - gave him an edge in what were racially divisive times. Subsequently he was a comedy performer on The Black and White Minstrel Show.

Later he appeared on the children's programme Tiswas and subsequently the show Three of a Kind with comedians Tracey Ullman and David Copperfield. Around this time he met his future wife, Dawn French, who encouraged him to move over to the fledgling alternative comedy scene, where he established a career as a stand-up comedy performer and character comedian. He introduced characters which both mocked and celebrated black British culture, such as Theophilus P. Wildebeeste (a Barry White-a-like), Brixton pirate radio DJ Delbert Wilkins and Trevor MacDoughnut (a spoof on Trevor McDonald). Much of his stand-up material, which was enormously popular on recorded LP, owed much to the writing abilities of Kim Fuller.

Henry's TV work started principally with his own self-titled show, which has appeared in variant forms ever since. He was also a part-time member of The Comic Strip.

In the early 1990s, Henry was lured to Hollywood to star in the film True Identity, in which his character spent most of the film pretending to be a white person in order to avoid the mob. The film was not successful, and it has been suggested that part of the problem was that the film's producers didn't really understand Henry and used him in a project that wasn't a good match for his talents.

Henry is perhaps best known to modern audiences as the star of the 1990s television series Chef!. In 1999 he also had a successful straight-acting lead role in the BBC drama Hope And Glory and tried his hand at soul singing, appearing, for example, as a back-up singer on Kate Bush's last recorded album in 1993. He would later say that both moves were not showing him at his best and that he felt most comfortable with character comedy, returning to the BBC to do Lenny Henry in Pieces, a character-based comedy sketch show.

In 2003, he was listed in The Observer as one of the 50 funniest acts in British comedy. He is also one of the celebrities most associated with the British Comic Relief charity organisation along with Griff Rhys Jones.