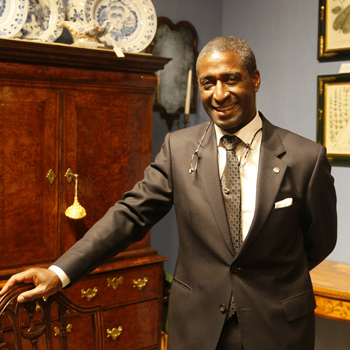 Antique dealer and a furniture specialist on BBC's Antiques Roadshow.
Lennox Cato is a regular face on the BBC's Antiques Roadshow. He is one of their highly regarded furniture specialists and he also sits on the governing body of the British Antique Dealers' Association (BADA), which represents Britain's 400 leading antique dealers.
This might appear to be the classic profile of a member of Britain's antiques trade establishment but Lennox' could hardly be less typical. He is the only black member of BADA and his childhood was utterly different from those of his colleagues in the world of antiques.
When Lennox was just two months old, his West Indian mother, who was struggling to bring up her children, agreed to let a woman with whom she had had a chance conversation, adopt him and his brother. It was a casual arrangement and certainly wouldn't be allowed by the authorities now, but it was to change his life.
His adopted mother was married to one of the Brighton's antiques trade's great characters, so Lennox grew up in the exciting world of antique shops and dealers. "I was always thinking on my feet," he recalls "The boy may now have left Brighton but Brighton has never left the boy!"
At 14, he spotted a clock in the window of a house on his way to school; on the return journey that afternoon he knocked on the door and bought it from the owner. He made a profit and two years later left school to work full time in the antiques trade.
At 19 Lennox acquired his own shop and a decade later bought a Georgian house in Lewes but unfortunately this was just before the market for art, antiques and property slumped in the late 1980s and early '90s.  It was a very difficult time but Lennox survived and he and his wife Sue now sell fine 18th and early 19th-century furniture and decorative art from their beautiful showrooms in Edenbridge, Kent.
Read More