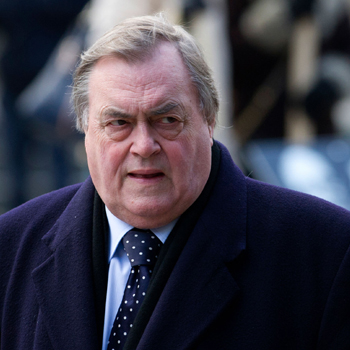 John Prescott rose from ship's steward to Deputy Prime Minister, via a degree in economics and a spell in the European Parliament. Perhaps his most significant achievement was to lead negotiations at Kyoto, resulting in the first international treaty on climate change.

John Prescott is recognised for his passionate interest in regeneration, and particularly housing. He is continuing to advise the Chinese government on their plans to build a thousand new 'sustainable' cities.

Always a colourful character, Prescott is also known for a number of controversial episodes - not least punching the farmer who threw an egg at him during the 2001 election.

John Prescott was born in Prestatyn, Wales, in 1938. The son of a railway signalman, he was educated at Ellesmere Port Secondary Modern and at 15 began work as a trainee chef.

In 1963, after working for ten years as a steward in the Merchant Navy, he gained a diploma in economics and politics at Ruskin College, Oxford. He later went on to gain a BSc in economics and economic history at the University of Hull.

Maritime safety motivated his decision to work as a full-time official for the National Union of Seamen between 1968 and 1970.

John Prescott was elected Labour Member of Parliament for Hull East in 1970. He was a member of the Council of Europe between 1972 and 1975, Delegate EEC Parliamentary in 1975 and Leader of the Labour Party Delegation to the European Parliament between 1976 and 1979.

He held a series of Shadow Cabinet posts, dealing with regional affairs, employment, energy and transport, and in 1994 was elected Deputy Leader of the Labour Party.

Following the Labour Party's election in May 1997 he was appointed Deputy Prime Minister and First Secretary of State for Environment, Transport and the Regions.

The Office of the Deputy Prime Minister was created as part of the Cabinet Office in 2001, and was made a Department in its own right in 2002.

In May 2006 the PM asked John Prescott to chair a number of major Cabinet Committees and to oversee the efficient development of Government policy. He also asked him to continue with his international work particularly with regard to China and Eastern Europe, and, in recognition of his work in delivering the Kyoto Treaty, to work with the Foreign Secretary and the Secretary of State for the Environment on developing the post Kyoto agenda.

John retired as MP for Hull East in the 2010 general election and was elevated to the Upper House. Since leaving office he has found time to film highly acclaimed television documentaries about the British class system while the next subject to receive the Prescott treatment will be the North-South divide. An entertaining raconteur, he is available for after dinner and keynote speeches.