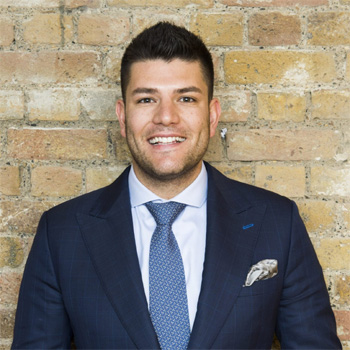 Winner of The Apprentice 2014, Mark Wright is now CEO of digital marketing agency, Climb Online, which he launched with Lord Alan Sugar’s backing after winning.

Born and raised in Australia, Mark spent 6 months travelling the world before his arrival in London in 2012. Staying in a hostel in Victoria, he arrived with only a rucksack full of clothes and less than £200 in the bank, he needed to think on his feet.

With the little money he had, he purchased a suit and began door knocking at businesses looking for work. He managed to get a position in an internet marketing firm where he spent two years learning the trade before establishing himself as one of the leading figures in the industry.

Since its launch in January 2015, the company has more than doubled the £1.7m it made in year one and has grown from just seven staff to 40 across Essex, Central London, Bristol and has plans to expand into Cape Town, SA and claims to be the most successful winner of the BBC series to date.

Climb Online has a portfolio of more than 400 clients, including major names Groupon, Be Wiser Insurance and Imagine Cruising.

Mark has taken his experiences from the BBC apprentice and pushed forward both personally and professionally gaining huge respect and admiration from those in his field including his competitors.

Mark is a forward thinking driven entrepreneur who invests in his own development as well as the development of his team.

Mark continues to embark on new adventures to increase his skill to his client base making him an exceptional entrepreneur.

Winner of The Apprentice 2014, Mark Wright is now CEO of a highly successful digital marketing agency, Climb Online, which he launched with Lord Alan Sugar’s backing after winning in 2015.