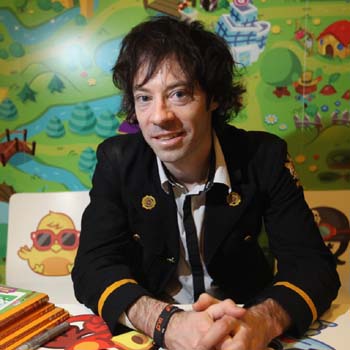 Michael Acton Smith is CEO, Creative Director and founder of entertainment company Mind Candy; the driving force behind the global phenomenon for kids - Moshi Monsters. He has been described by The Daily Telegraph as "a rock star version of Willy Wonka" and by The Independent as "a polite version of Bob Geldof."
Moshi Monsters has over 75 million users around the world and has expanded offline into best selling toys; the UK number one selling kids magazine; a best selling video game; top selling music album; books; trading cards and more.  In July 2011, Mind Candy was valued at $200 million.
Michael Acton Smith studied Geography at the University of Birmingham where he met Tom Boardman who became one of his best friends and together, in their early twenties, they founded online gadget and gift retailer Firebox.com. They started out with a rent-free attic and a £1,000 loan from Michael's mother. Their breakthrough moment came in the form of the "Shot Glass Chess Set". Within five years they were listed by The Sunday Times 'Fast Track 100' as the 13th fastest growing, privately owned business in the UK.
Following his success with Firebox, Michael secured $10m backing and launched Mind Candy in 2004. The company's alternate reality game Perplex City, was a global treasure hunt with £100,000 buried somewhere in the world that played out across various media including websites, text messages, magazines, live events, skywriting and multiple helicopters. Positive press coverage hailed Perplex City as the future of gaming. But after three years (and $9m spent) Perplex City was placed on indefinite hold.
In 2007,  inspired by the growing success of Facebook and kids brands including Tamagotchi, Mind Candy launched its online world Moshi Monsters.
Michael Acton Smith's ultimate vision is to 'build the largest entertainment brand in the world for this new digital generation of kids'.  He was appointed OBE in the 2014 New Year Honours for services to the creative industries.