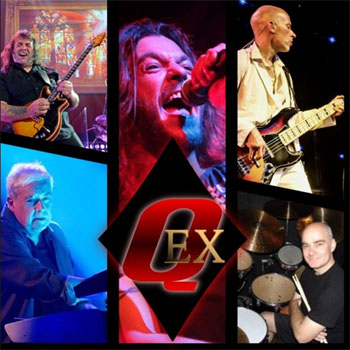 Guitarist Phil Hilborne is an idol for those who grew up reading Guitar magazines and has worked closely with Brian May when he has needed another guitarist, he has 30 years of touring and recording experience including playing with Iron Maiden drummer, Nicko McBrain’s touring drum clinic.

Neil Drinkwater, on keyboards was the associate conductor for We Will Rock You for 10 years. Artists he has played with include, Chris Rea, Van Morrison, Barbara Dickson, Ronnie Spector amongst others.

Gareth Roberts, currently the drummer for West End show, Wicked also has many legends on his CV, Stevie Wonder, Barry White, Paloma Faith and Sarah Brightman. He is also one of the few drummers who get the call to play with the BBC Symphony Orchestra.

Finally Vocalist, Peter Eldridge, not only a fantastic rock front man, has wide and varied musical talent in the jazz realms as a vocalist, pianist, composer and arranger with four critically acclaimed albums to his name.

This is a high quality performance that leads you to experience the sound of QUEEN that we all love.

The performance is up to 45 minutes and is suitable for an after dinner show. As well as, or instead of the "off the shelf” Queen set, QEX can, by prior arrangement, put a customised event on for you!

This is a high quality performance that leads you to experience the sound of QUEEN that we all love. A great corporate choice!