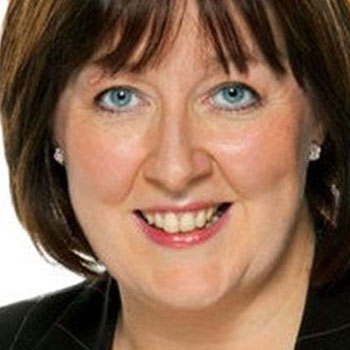 Shelagh presents the Lunchtime Show for BBC Five Live.
She has co-presented Five Live's Breakfast show, alongside Nicky Campbell, and the pair were multiple Sony Radio Award winners. During this time Shelagh interviewed top politicians, sports stars, musicians and actors. Shelagh excels at live outside broadcast has covered some of the biggest world events internationally and across the UK. With her intelligent, sometimes irreverent sense of humour, she can make politics and hard-hitting news stories accessible to a mass audience.
A graduate in Spanish, French and Portuguese from Durham University, Shelagh started her career with the BBC as a broadcast journalist. She trained as a reporter and producer for various BBC Radio and TV regions including Radio Four and BBC North West and worked on programmes including The World at One, PM, Sunday Service and Euronews.
Her BBC career has included anchoring coverage of the American presidential elections, broadcasting live from St Peters Square in Rome for the funeral of Pope John Paul II and covering the devastation of the Boxing Day tsunami from Thailand.
A compassionate and thoughtful journalist, Shelagh was invited to cover the live service at Anfield marking the 20th anniversary of the Hillsborough Tragedy, and has also reported on the James Bulger murder trial and the Madrid train bombings.
But there is a lighter side to her life, and Shelagh knows how to enjoy it. She had great fun covering not only Madonna's wedding to Guy Ritchie, but also exclusively breaking the story for Five Live that an intruder had hidden himself in the cathedral organ for days to film Rocco Ritchie's christening. Not opposed to roughing it in the name of broadcasting, Shelagh camped overnight in an Essex field with over 40,000 scouts for the World Scout Jamboree.
An experienced presenter and writer, Shelagh has been a guest reporter for ITV on Tonight with Trevor McDonald, The Alan Titchmarsh Show and BBC's The One Show. She is a regular contributor to the Daily Telegraph, Total Politics and The Tablet.
Read More