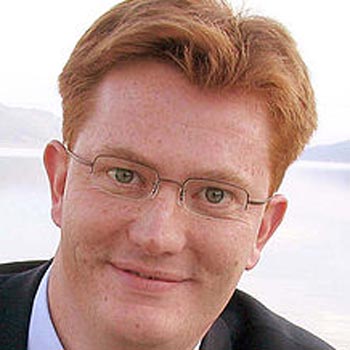 Born in 1972, Danny Alexander spent his early years on Colonsay before his family moved to Glengarry and he went to Lochaber High School in Fort William.
He read Philosophy, Politics and Economics at Oxford.  After this Danny worked as a press officer for the Scottish Liberal Democrats before spending four years at the European Movement and then four years as Director of Communications for the Britain in Europe campaign. In 2003 he was appointed the Head of Communications for the newly formed Cairngorms National Park Authority before being elected as MP for the newly created seat of Inverness, Nairn, and Badenoch & Strathspey in the 2005 election.
He was one of four Liberal Democrats who drew up the UK coalition government agreement with the Conservatives in 2010.
He lost his Inverness, Nairn, Badenoch and Strathspey seat to the SNP in the May 2015 general election.
Following his departure from the House of Commons, Alexander was confirmed as vice-president at the Asian Infrastructure Investment Bank.
Sir Danny was a committed supporter of the Britain Stronger in Europe campaign for the EU Referendum in 2016.
He was knighted in the 2015 Dissolution Honours Lists on 27 August 2015.