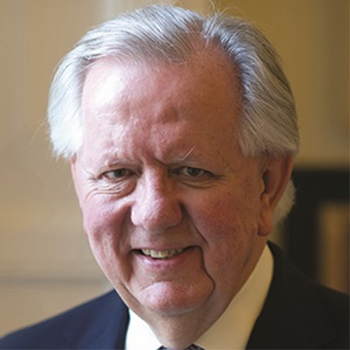 Steven Norris was a Member of Parliament for over fourteen years and served as Parliamentary Private Secretary at the Departments of Environment, Trade and Industry and the Home Office and was Minister for Transport in London from 1992-96.
He now sits on the boards of Transport for London and the London Development Agency.
Steve is a former Director General of the Road Haulage Association and has wide experience of both quoted and unquoted companies.
He is Chairman of AMT-Sybex Group Ltd and Saferoad BLG Ltd.  He is a Non-Executive Director of ITIS Holdings plc, Ardmore Construction, Byrne Estates, Initiate Consulting and The Internet Corporation and an advisor to a number of other companies and public sector bodies on public policy and governmental issues.
Other non-commercial positions include Chair of the trustees of Eastside Young Leaders Academy and of the London Action Trust. He is President of ITS-UK and a Patron of the Campaign for Better Transport and of the cycling charity Sustrans.  Steve is also a Companion of the Institution of Civil Engineers.
Steve is a regular broadcaster and writer who is frequently in demand as an after dinner speaker and conference chairman.
Read More