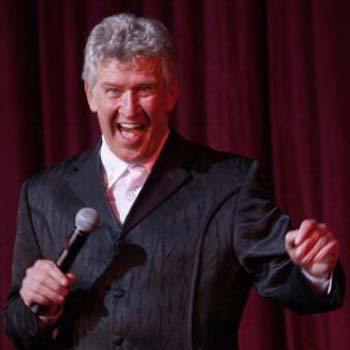 Tony Jo is one of the most talented, versatile and funniest comedians in show business. Tony has worked in all aspects of his field and always to the highest standards. In 1997, 1999 and 2001 Tony was awarded the After Dinner Speaker of The Year Award. He is one of those speakers who can adapt to any situation, all male, all female or mixed, and for this has earned the nickname, "The Governor".

Tony is equally at home whether it be Corporate Hospitality, Sporting functions, Company dinners, Product launches or hosting award ceremonies. He is also a first class compere and Master of ceremonies.

He has written material for many TV shows including: You've Been Framed, Stars in Your Eyes, Chain Letters, Crosswitts and Born Lucky. Tony also worked on the production team of A Question Of Sport for ten years. Television appearances have included Jim Davidson's Generation Game, The Comedians (Four series) Live at Her Majesty's and three Royal Command Shows and numerous appearances on local networks.

Tony Jo has toured with Dr. Hook for seven years and supported many big stars such as Tom Jones, Engelbert Humperdinck, Gene Pitney, Dame Shirley Bassey and Vic Damone, appearing in major theatres all over the country, including the Royal Albert Hall, London Palladium, Wembley, NEC Arena, Bournemouth BIC and the MEN Arena.

Tony has worked on the QE2 and Fred Olsen cruise liners, both as a member of the Grumbleweeds and also as a solo artiste. He has also worked on many major cruise ships as a solo entertainer.

With Tony Jo you have one of the most sought after and reliable entertainers on the circuit, and most importantly someone who is very funny.