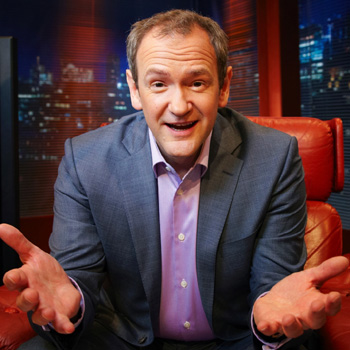 Born in Rothbury, Northumbria in 1970 and educated at Durham School and Trinity College, Cambridge, Alexander Armstrong first found fame as one half of comedy duo Armstrong and Miller on Channel 4. He met Miller at Cambridge in 1992 when they were both in the Cambridge Footlights and the show has subsequently transferred to the BBC. It's mix of sketches and musical pieces also nods to the great Flanders and Swann double act.

He has starred in three series of the ITV drama Life Begins with Caroline Quentin. He appeared in Steve Coogan's Saxondale as a famous motoring correspondent, and as David Cameron in the satirical fictional documentary The Trial of Tony Blair.  He played a middle aged man who leaves his wife during a mid-life crisis in Maggie Mae and appeared as a guest star in Hotel Babylon. He was the voice of Mr Smith, an alien computer, in The Sarah Jane Adventures and in the Doctor Who episodes The Stolen Earth and Journey's End.

He is possibly best known for his starring roles in the Pimms adverts, and his successful chairing of the BBC satirical panel game Have I Got News for You where he also regularly appears as a guest.

His TV presenting career includes chairing the comedy panel show Best of the Worst on Channel 4. He presented the ITV1 comedy quiz series Don't Call Me Stupid and in 2008 was presenter and narrator of When Were We Funniest?

He has presented Pointless since 2009 and also presented the BBC documentary Alexander Armstrong's Very British Holiday and he has been the subject of the BBC's Who Do You Think You Are?

Actor and comedian who presents Pointless on BBC1. He is one half of the comedy duo Armstrong and Miller but he has also found fame in dramas and sitcoms. A regular host on Have I Got News for You.