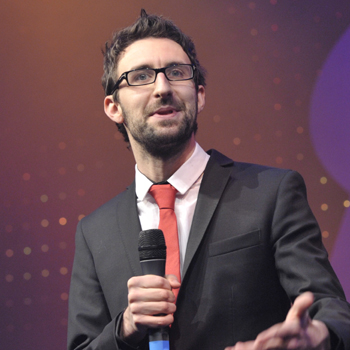 Mark has been the face of shows such as BBC Four’s We Need Answers and BBC Radio 4’s Mark Watson Makes The World Substantially Better. He has also appeared on Mock The Week, Celebrity Pointless, Have I Got News For You, Would I Lie To You?, Live At The Apollo and Channel 4’s Comedy Gala. He is currently recording another series of his hit Radio 4 show Mark Watson Talks A Bit About Life.

In August 2016, Mark performed his latest show I’m Not Here at the Edinburgh Festival, and then went on to tour it around the UK from September – December 2016. The show has received 4 & 5 star reviews.

"Mark was absolutely fantastic once again at the Digital Awards! He got the tone of the event exactly right and we‘ve had really positive feedback from the audience, even more impressive he managed to get through all 30 odd awards within the allocated time so we didn‘t run over which was great."

"Mark was certainly a hit with everyone. He had the room in stitches and it was just at the right level for our crowd...not only is he very funny, but also a very nice fellow who is very easy to work with...please do pass on our thanks"

"Mark was absolutely fantastic, a really lovely guy and he read the crowd perfectly. Really pleased he stuck around afterwards for a chat."

"It was a fantastic evening and Mark was perfect for the role, he really connected with us as a business and nailed his act and was great for him to hang around after for some pictures etc.  Great night, great act."
Microsoft
"Mark was outstanding . Hit the right tone, managed the awards perfectly and the client is delighted. What more can I say!"
Quantum Communications

Popular comedian whose credits include Mock the Week, Live at the Apollo and McIntyre's Roadshow as well as being a regular panellist on 5 Live's Fighting Talk and Taskmaster.Really top notch.