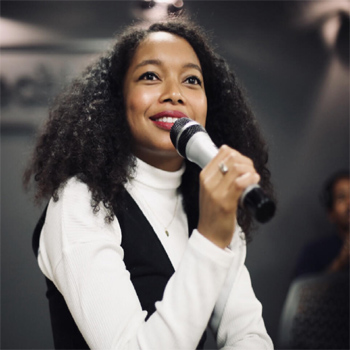 Multi award winning Abadesi is the Founder and CEO of Hustle Crew and the Co-Host of the Techish Podcast, which is listed in the top 20 Tech podcast on Apple.

After graduating from the London School of Economics in 2009, she wrote for the Financial Times before she decided to fully explore her fascination with Tech.

Abadesi previously worked at Product Hunt, Elpha, Amazon, HotelTonight and Groupon where she was promoted after her first 8 months and helped scale her department 5X leading up to their record breaking IPO. All of these were essential building blocks for her career, however she became very aware of the distinct lack of diversity in C-suite positions and founded Hustle Crew as a means to work with leaders (particularly in technology spaced) to address this.

In 2016 she published her careers advice book, Dream Big Hustle Hard: A Millennial Woman’s Guide to Success in Tech which is rated 5 stars on Amazon. She has been featured in Elle, Stylist, BBC, Forbes, The Times and The Independent. She was also recently included in the Financial Times list of Top 100 Influential Leaders in Tech and Tech Nation’s 50 most prominent and influential voices in Tech.

Incredibly talented, Abadesi gives inspiring talks about on a variety of subject such as diversity in leadership, women in technology and is also a dynamic conference and awards host.