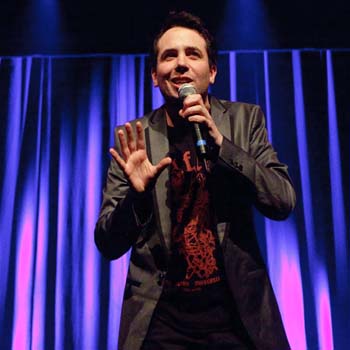 Rob Broderick & Abandoman were the 2010 Winners of The Hackney Empire New Act of the Year and The Musical Comedy Awards. Their mission, to create hilarious musical numbers at lightning speed.

A pair of Irish would-be hip-hoppers with a difference maximise audience participation with their 'what's in your pocket?' rap routine.  Members of the audience are asked to produce items from pockets and handbags to provide Abandoman with the inspiration for their one-off compositions.

Abandoman appeal to music and comedy lovers.  They have been wowing audiences across the country supporting DJ Yoda, Atmosphere, Ed  Sheeran, Howard Marks, Stephen K Amos and Micky Flanagan.
They also have a regular spot on 6Music, as well as being the house band for Dick and Dom and have jammed with Catherine Tate, Jessica Hynes and Tim Vine.

"Wow - Abandoman were the best awards dinner entertainment I've ever seen. Not only were they engaging, interactive, on message and funny, but they were also really nice guys! I would absolutely recommend them to anyone and would happily book them for other clients. Thanks guys - you made me look good!" Off License News Awards

"Astonishing and hilarious to watch"  Metro

"A star of the future!" Time Out

A pair of Irish would-be hip hoppers with a difference, Abandoman maximise audience participation with their 'what's in your pocket' rap routine where members of the audience provide items to inspire one-off rap compositions.