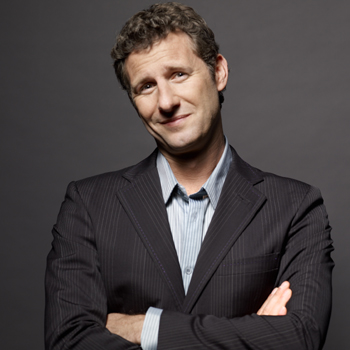 Adam Hills is an Australian comedian and television presenter with a big following in the UK.
He was born without a right foot and wears a prosthesis, which has become a frequent source of comedy in his act.
Adam first developed an interest in comedy after discovering an inflight comedy channel on a plane at the age of eight.
He began performing as a stand-up comedian in 1989 at the age of 19, and since 1997 has produced ten solo shows which have toured internationally. He has performed at the Edinburgh Festival Fringe, the Melbourne International Comedy Festival and the Montreal Just for Laughs festival, earning three consecutive Perrier Award nominations for his Edinburgh shows in 2001, 2002 and 2003.
On Australian television he is best known for hosting the music trivia show 'Spicks and Specks' and the talk show 'Adam Hills Tonight', and in Britain he has gained many new fans when he hosted 'The Last Leg' which began during the 2012 London Paralympics and is now a regular series, with Josh Widdicombe and Alex Brooker.
His 2016 tour 'Clown Heart' with his trademark infectious good humour, won hearts wherever he went.
Read More