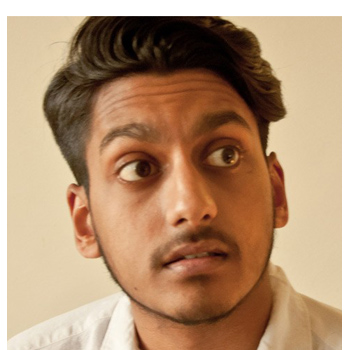 Winner of the 2014 award for Best Show at the Leicester Comedy Festival, Ahir Shah is an exciting young, sharp and intellectual comedian, whose unique brand of sophisticated stand-up features a blend of emotional frankness, poetic language, and jokes.

In August 2015, Ahir debuted his show, Distant, at the Edinburgh Festival Fringe, receiving huge critical success and packed houses, he went on to perform the show at the Soho Theatre for a week in October. Centering around the importance of faraway things, the show saw Ahir turn his incisive brand of comedy to topics spanning World War One, cigarettes, vegetarianism, Islamism, capitalism, politics, climate change, love, and pirates. 2016 saw Ahir return to Edinburgh with his hotly anticipated new show Machines.

Ahir began occasionally doing stand-up at fifteen (i.e. too young), and over the course of the last ten years the development of his erudite, philosophical style has seen his position in the circuit skyrocket from “curiosity” to “interloper”. Distant is the fourth hour Ahir has performed at the Fringe, succeeding Texture (2014) which was described by Chortle as being “a delightful, considered and intelligent piece of work from a comedian who’s gained his wings”, Anatomy (2013) which Fest regarded as being “as thoughtful and compelling a show as you’re likely to come across all August”, and Astrology (2011).

Outside of stand-up, Ahir is currently writing a sitcom pilot for Channel 4 titled Strange Land, about immigration in 1960s London. He has also been a contributing writer on Skins (Channel 4), The News Quiz (BBC Radio 4) and Newsjack (BBC Radio 4 Extra). His television credits include Brotherhood (Comedy Central), The Midnight Beast (E4), Live At The Electric (BBC Three), Campus and The Seven Ages of Love (both Channel 4).