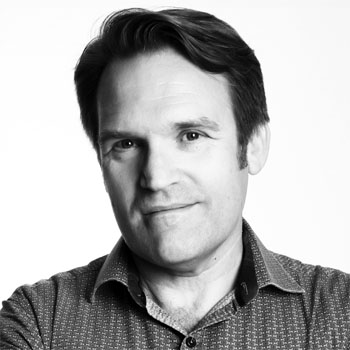 Alan Marriott has been teaching and performing for over thirty years both in Canada and Europe.  His professional career spans many disciplines specifically voice overs, teaching, improvisation, marketing consultancy, writing, and performance for stage, film and television.

Having misspent his childhood endlessly watching the Looney Tunes, Alan Marriott has been doing funny voices for as long as he can remember.  To actually start voicing cartoons himself was the fulfilment of a life's dream for Alan, and his voice can be frequently heard popping up in animation throughout the English speaking world.

After a brief time attending Studio 58 acting school (Vancouver ), Alan left to join the first season of Salmon Arm Summer Stock Youth Theatre (SASSY) and did two seasons with the company. While in Vancouver, Alan joined The Vancouver Theatresports League and performed with them for five years.

After more than twenty years living and working in London, Alan returned to Vancouver, British Columbia where he mounted a new production of The Impro Musical (for VTSL) and continued his successful voice over career.

Now back in London since the summer of 2017, Alan is busy working on many new performance, teaching and voice over projects.

Alan has also appeared as a voice in many feature films including Asterix – The Mansions of the Gods (as Cacofonix), Planet 51, Globi and the Stollen Shadows, Boo-Zino and the Snurks, and most recently as 'Stan' in Norm of the North 2. Alan has also voiced many anime films such as, X, Violence Jack and Appleseed.

Alan can be heard in countless commercials and trailers such as MBNA Credit Cards, many trailers for Warner Brothers Films (including Scooby Doo) and Nickelodeon. He is the current voice of White Spot restaurants.

Alan actually got in front of the camera when he starred in a feature film, 'Teeth' with film director, Jonathan Newman, in the lead role as Dr. Horace Morgan (a man with unfeasibly large teeth) who is 'looking for love'.

Alan has collaborated in the creation of many written musicals, including Da Doo Me (with David C Jones), Newer, Bigger, Better, and Mrs. Claus' Kitchen (both with Bill Allman and Kevin O'Brien). Alan's book on impro, Genius Now was published in 2008.

Alan also co-created and appeared in Dogland, a comedy CD written and performed with Adam Long of the Reduced Shakespeare Company and Voice Over veteran Stefan Ashton Frank.

Currently Alan is working on a new musical with his double act partner Sandra-Mae Luykx and is rewriting Wonderboy – The Musical with Philip Pellew of Showstoppers!.