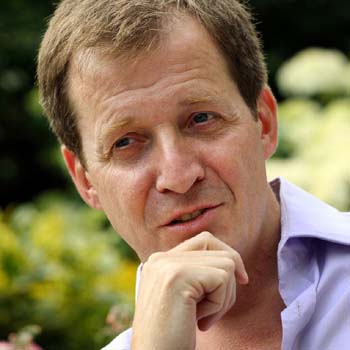 Alastair read modern languages at Cambridge but made money by writing pornographic stories for the men's magazine Forum before entering journalism.

By the age of 29 he had moved a long way from his roots as the son of a Pennine vet to become the news editor of a newspaper called Today but the publication's launch faltered and the experience led him to a nervous breakdown. He is said to have come out of the experience less brash, more disciplined and even more driven in his career. Around the same time he gave up alcohol - a step believed by many to give him the advantage of a clear head 24 hours a day to deal with the media.

He soon became political editor of the Daily Mirror. During this time he was also one of then Labour leader Neil Kinnock's closest advisers. It was from that post which Mr Campbell resigned to become spokesman for Tony Blair, then leader of the opposition. He was heavily involved with the modernisation of the Labour party, and instrumental in many New Labour ideas such as All Women Shortlists. With the Labour election victory in 1997, he became the prime minister's chief press secretary, setting up a formidable Whitehall machine to put over the government's views and try to control the news agenda.

In 2000 Alastair gave up daily briefings to Westminster lobby journalists to concentrate more on long-term strategy. It was a move prompted by the fear that he, rather than his boss, was becoming the focus of media stories.  In 2003 in resigned from this post. A national theatre tour "An evening with Alastair Campbell" followed.
In July 2007, he published his first book 'The Blair Years' which was an instant Sunday Times Number 1 bestseller.  His first novel 'All In The Mind' appeared in 2008, to enthusiastic reviews for its frank examination of mental illness. His second novel 'Maya,' a gripping analysis of fame and the obsession it attracts, was published in 2010 and 'The Happy Depressive' in 2012.
His book on leadership 'Winners: And How They Succeed' (published 2016) examines how sports stars excel, entrepreneurs thrive, and individuals achieve their ambition.
His award-winning one hour documentary about his own breakdown in 1986 was broadcast on BBC2 in 2008. Both the film, 'Cracking Up' and his book 'All In The Mind', won considerable praise from mental health charities and campaign groups for helping to break down the taboo surrounding mental health. He received the Mind Champion of the Year award in May 2009 in recognition of his work to break down the stigma around mental illness, and continues to campaign on the issue.
LIVING BETTER is Alastair Campbell’s current book which is an honest, moving and life affirming account of his lifelong struggle with depression. It is an autobiographical, psychological and psychiatric study, which explores his own childhood, family and other relationships, and examines the impact of his professional and political life on himself and those around him. But it also lays bare his relentless quest to understand depression not just through his own life but through different treatments.
Alastair is in much demand on the corporate circuit as commentator and speaker.
Read More