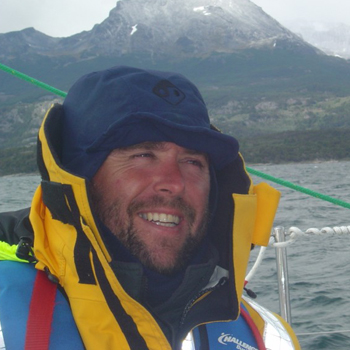 Nine years of hard work, tenacity, resilience and an unfailing desire to never give up, Alex Alley is about to embark on his biggest adventure to date. A professional sailor all his life, in November 2018 he will head out from Northern France into the Atlantic in his crowd funded Class 40 race yacht. His aim – to break a Solo Non-Stop Around the World record. He will be alone at sea for almost 4½ months – pushing himself and his boat to the limits.

Multiple World Record and World Champion sailor, Round the World Yachtsman, and co-author of Boat to Boardroom, Alex has spoken at conferences and helped companies all over the world, from sales teams to the boardroom, from charities to some of the world’s biggest blue-chip companies. His unique style keeps the audience captivated while instilling powerful lessons. Whatever the level of seniority, there is always learning to be had.

He cleverly brings to life the analogy between sailing and business and draws lessons from top level yacht racing – ‘we are literally all in the same boat, with a skipper/CEO in charge. We all have to cope with competition and when things don’t go to plan we still have to deal with it.’

He talks candidly about living, and working, with the same team 24/7 for up to 8 weeks at a time, through storms and life threatening conditions. How do you motivate a team when they are 1000 miles from civilisation, 3 crew down, one seriously injured, it’s freezing cold outside with huge waves pounding the boat day and night?

But most importantly he makes it relevant to the workplace.

"Excellent yet again. This is the second time I have heard Alex speak, and it is still just as impressive and the lessons are still just as powerful. Again the audience has left inspired and fired up"  Financial Director, Scottish Power, Centrica/BG Group

"Alex thank you and you were great. We really liked your style and the conversation helped in many ways."  Udell Group - October 2013
"Alex has the most extraordinary leadership skills. He has an innate way of understanding what is required to motivate the team at any given moment with his unending optimism and energy. Alex has my enormous respect. I have lead teams and facilitated large groups and have never seen it done better."  British Airways Executive Club

Alex Alley's challenge came during the Global Challenge Round the World Yacht Race, where he led his team in some of the world's most hostile environments, non-stop 24 hrs a day for eight weeks.