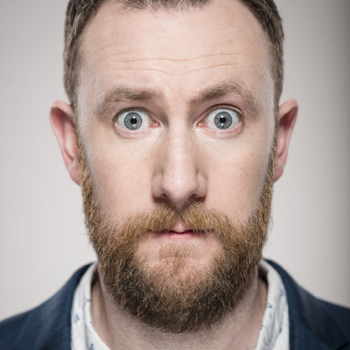 Award winning comedian Alex Horne has established a reputation among critics, comics and audiences as a thoughtful and original stand-up comedian and writer.

He is the creator and host of comedy music show The Horne Section. Together, Alex and his five piece band create a heady mix of stand-up comedy, cabaret performances, outlandish musical talent and special guests. They began as a live show and were quickly commissioned for BBC Radio 4 series Alex Horne Presents: The Horne Section, which has now run for three series. The band has also accompanied Alex as guest host on 8 Out of 10 Cats Does Countdown (Channel 4) and were the only band ever to host Never Mind The Buzzcocks (BBC2).

Alex is the host of iTunes chart topping and Chortle Award Nominated podcast Alex Horne Breaks the News (Dave). The show takes a look at the week's news topics mixed in with a smattering of statistical analysis, musical numbers and ad hoc features.

He has taken nine solo shows to the Edinburgh Fringe including Monsieur Butterfly in 2014, which earned him a Foster's Edinburgh Comedy Award nomination for 'Best Comedy Show'. He has also released two books based on his critically acclaimed Edinburgh shows; Birdwatchingwatching in 2009 and Wordwatching in 2010.

Numerous TV appearances include two series as co-host of We Need Answers (BBC4), The Matt Lucas Awards (BBC1), Dara O'Briain's School of Hard Sums (Dave), Dave's One Night Stand (Dave) and The Games That Time Forgot, a documentary written and presented by Alex for BBC Four.

Alex's innovative style and penetrating wit allows him to make every performance individual. Whether giving a spoof 'lecture', hosting an interactive quiz or presenting an awards ceremony, Alex Horne consistently surprises and delights his audience with his exceptional ability to take the ordinary and make it extraordinary.

For corporate clients he can use his comedic skills, combined with the niftiest use of Powerpoint on the circuit, to create a unique, bespoke performance - The Horne Lectures & Quiz.

"Alex Horne was amazing!! Its a really hard crowd at Gramia, and he had the whole room in awe with his beat boxing!  I highly recommend him.  Grocer MAP Awards

"Alex Horne was a roaring success at last night's PIPA! The audience and our internal team left the event as big fans. He engaged really well with the crowd and was professional and a real pleasure to deal with on the evening.  PIPA Awards

“Alex was absolutely brilliant. He was really perfect for the event and such a nice guy - really easy to work with. Loads of guests have been asking after him since. A really great success so please give him our hugest thanks, he did such a great job.  Job Crowd Awards