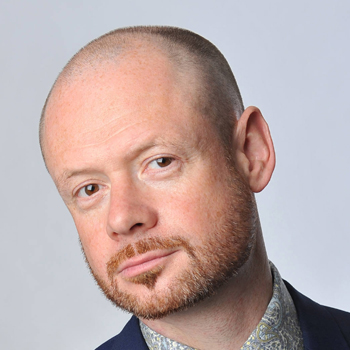 Comedian, actor and writer Alistair Barrie is much in demand worldwide as both a headline comedian and an MC.
Alistair is a member of The Cutting Edge team at London's Comedy Store and is a regular at corporate events and festivals. He has taken five solo shows to the Edinburgh Fringe and written on several shows for the BBC, ITV, Channel 4 and Radio 4.
As well as performing in the UK and Ireland Alistair has appeared in the USA, Australia, Switzerland, The Netherlands, South Africa, Estonia, Mumbai, Cyprus, Crete, Luxembourg, Bahrain, Qatar, Belgium, Prague, Dubai, Doha, Abu Dhabi, Norway, Hong Kong, Macau, Malta, Singapore, Indonesia, Kuala Lumpur, Cambodia and Athens as well as at the world's highest gig on a mountain in France and on a boat in the middle of the North Sea.
Alistair is available for corporate gigs as a comedian and as an MC and host. The Cutting Edge team, including Alistair, is also available for entertainment at corporate events.

"Alistair was absolutely amazing!! This is usually a tough crowd but Alistair made it look so easy and people are still talking about him a week later.

I was extremely impressed and with 33 awards to get through, he made it a record of 35 minutes without it feeling rushed at all. Please do pass on our thanks to him and I’m sure we’ll be using him again soon!"