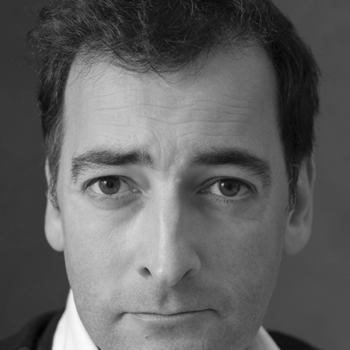 Although best known for the BAFTA winning 'The Big Impression', Alistair is also a highly-acclaimed actor whose theatre work includes : 'Little Shop of Horrors' (Duke of York's Theatre - for which he received an Olivier nomination) 'Merry Wives: The Musical' (RSC), Measure For Measure (for Thelma Holt) and 'Cabaret' (Lyric Theatre). Television Appearances include 'Bleak House' (BBC One), 'Mayo' (BBC One) 'Who Do You Think You Are?' (BBC One) and 'Have I Got News For You' (BBC One).
A passionate campaigner for a number of environmental issues, Alistair serves as an ambassador for WWF-UK and was pivotal in the 2009 Greenpeace attempt to prevent a third runway being built at Heathrow.
Alistair has recently undertaken a stand-up tour and Edinburgh shows, and co-written a book with Ronni Ancona, entitled A Matter of Life and Death (or 'How to Wean Your Man Off Football). His self-penned play 'Heavy Pencil' will be premiered at The King's Head in Islington and he also appeared in the film 'My Life in Ruins' staring Nia Vardalos (My Big Fat Greek Wedding) and Richard Dreyfuss. Alistair has also been heard on numerous Radio 4 comedy shows including Look Away now and Elvenquest, alongside Stephen Mangan and Kevin Eldon.
He is now well established as an after dinner speaker and has spoken at events as diverse as the Footballers Association Annual Dinner and the Royal Television Society Awards.
"We were absolutely delighted by Alistair‘s performance last night! His set was superb, he built so many property references into it, along with several other very popular topics and added singing and acting too, which all combined to be hilarious and extremely entertaining. he actual Awards element was superb too, very professional as we‘d expect, but also friendly, warm and involved with the guests, they loved him!"  The Negotiator Awards for Propertydrum Ltd- Nov 2015
"Alistair was brilliant. It was lovely having him sit at our table for dinner as it felt he really became part of the awards and it was noted by many in the audience. He was very professional and kept to timings perfectly whilst keeping the awards relaxed and fresh. His 15 minutes of comedy went down brilliantly and the audience were very happy."  Sustainability Leaders Awards - November 2014
"The Cathedral is not an easy venue in which to perform and Alistair delivered a fantastic performance, holding the audience for close to 30 minutes. He also now holds the record for the longest post-performance queue of guests wanting to say thank you that I have seen in all my Gala Dinner years!  For me, he was a real delight to work with... Alistair has raised the bar!" RenewableUK Gala Dinner - November 2013
"We really enjoyed having Alistair on site. He was gentleman and gave a really good performance to a challenging crowd."  Saville Audio Visual for Tesco Grocery Suppliers Conference - November 2012
Read More