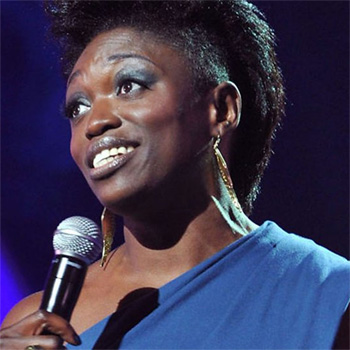 Actress, comedian, writer and shoe lover, Andi Osho has been performing since 2003 when she strode the boards in her stage debut 'What Happened Last Night?' Though not formally recognised as a classic production (actually it was dire) Osho made the most of this gay rape pantomime and went from strength to strength, pursuing her acting dream, going on to appear in a plethora of UK soaps, dramas and comedy totally nailing the portrayal of characters who work in the emergency services. This included a police officer in Waking The Dead, a doctor in Footballers' Wives and four appearances in Eastenders as a nurse (a different one each time, which technically makes her a qualified medical practitioner).
In 2007, Andi turned her hand (well her brain and her mouth) to stand up comedy winning a raft of awards, appearing on top stand up comedy shows, many of which involved having the name of the show in very bright lights behind her head. This did not distract her from the job at hand though and she turned in memorable performances on Michael McIntyre's Comedy Roadshow, Stand Up For The Week and Live At The Apollo (which not only included bright lights, but dry ice too).
If this weren't enough of an achievement, she also won not one, but two Mastermind crowns when she chose The Matrix Trilogy and then host John Humphrys as her specialist subjects (luckily the Radio 4 stalwart and political commentator had a sense of humour about it or that could have been a very awkward 30 minutes of television).
Andi is now well established as a regular contributor on TV and radio as well as being much in demand for live work on the stand up circuit including three live solo stand up tours.
Read More