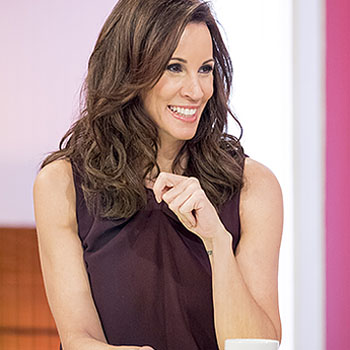 Before she became anchor of 'Loose Women' in 2007, Andrea McLean  was best-known as a presenter on GMTV.
During her time there she co-hosted with Ben Shepherd and Eamonn Holmes, and hosted LK Today in Lorraine Kelly's absence.  She also presented from South Africa, Australia and from the mountaintops of Switzerland, as well as presenting travel packages from The Caribbean, Greece, Spain and South Africa. She left the early-morning breakfast show in 2008 after 11 years, to concentrate on 'Loose Women'.
In 2009 Andrea took part in 'Celebrity Total Wipeout', filmed in Argentina. She couldn't stop laughing and came resoundingly last!
She competed in ITV1's reality ice-skating competition 'Dancing on Ice', in 2006 and after she was eliminated, she went on to present 'Dancing on Ice Extra' on weekdays during the rest of the show's run, along with fellow ex-contestant Andi Peters.
Other TV presenter roles include co-hosting 'Loose Lips' on Living TV and The National ESP Challenge Live.  Andrea has been a panellist on Espresso on Five, she presented the broom cupboard links between shows on Challenge TV, presented cookery shows on Carlton Food Network, and worked alongside Caroline Feraday on her Friday night phone-in show on LBC Radio.  She also presented 'Our House' for UKTV Style.
Away from presenting live TV  Andrea has appeared in a Bollywood movie, rap jumped off Table Mountain in South Africa and looped-the-loop strapped to the top of a bi-plane.  She has also gained her RAC Formula 4 motor racing license although she now drives a huge family car filled with children and a large labradoodle called Jackson.
Andrea graduated with a BA Hons in Modern Studies (History, Politics and International Relations) from Coventry University in 1991.  She then backpacked around the world, from India and the Far East to Australia and America, taking on jobs as diverse as a grill chef, barmaid, receptionist and factory worker. She began her career as a travel writer in 1993, later gaining her journalism qualification and becoming a staff writer and sub-editor at Central Press Features.
Andrea still works as a journalist, and has written for The Mail on Sunday, The Daily Record, Red, TV Times, BBC Parenting Magazine, Woman's Weekly, Star Magazine, The Sunday Post, Bella, Best, Closer & Woman.
Born in Scotland, Andrea was raised in Trinidad and Tobago, hence her sometimes Scottish/Caribbean accent. She moved back to the UK when she was 15 and now lives in Surrey.
Read More