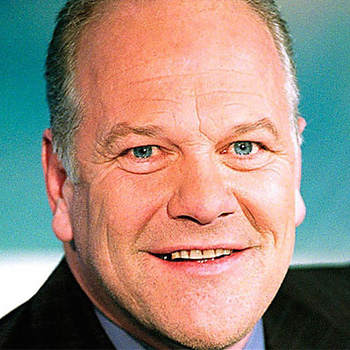 With the arrival of Andy Gray from Wolves in November 1983 the Everton FC team gained a motivator who raised morale to such an extent that they became the best side in England.

His incredible aerial ability, courage, and skill on the ground made Andy Gray an awesome striker. He soon forged a striking partnership with Graeme Sharp, both scoring in the 2-0 FA Cup Final victory over Watford that season. Gray found his best form in the 1984/85 season and the two Scots led the line for Everton's successful chase for the League Title and the European Cup-Winners' Cup, supplied with crosses by Kevin Sheedy and Trevor Steven.

That summer, Kendall decided to strengthen his strike force with the addition of Gary Lineker from Leicester City. Andy Gray felt he had no choice but to leave, and went to Villa for £1.5M. His best years really were behind him now, and after spells at Rangers and West Bromwich he went into broadcasting as a pundit on Sky TV.

Since leaving Sky Sports, Andy has been working in Qatar with Richard Keys but has returned to commentate for several games for BT Sport - an after dinner speaker.
Read More