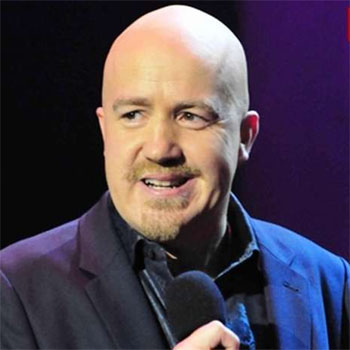 Comedian Andy Parsons is also an established writer for TV and radio, having penned material for the likes of Spitting Image, Smith & Jones and Lenny Henry. Most recently he has been a regular guest on the BBC satirical quiz Mock The Week.
He started his career writing for Weekending and went on to become one of the main writers on the ground-breaking Spitting Image satirical puppet show. Andy has performed on numerous radio & TV shows including Live at the Apollo, Mock the Week, QI, Saturday Live, The Stand Up Show, The Comedy Store, They Think It's All Over, The PMQ show, Scrooby Trevithick and Parsons & Naylor's Pull-Out Sections.
Having won the Time Out Comedy Award in 2002 he has performed his stand-up all over the world, from the prestigious Montreal and Kilkenny comedy festivals to touring Australia and New Zealand. He has had three sell-out National tours and in 2009 he released his debut DVD 'Britain's Got Idiots', which was followed up by 'Gruntled' in 2011, ‘Slacktivist’ in 2013 and “Live & Unleashed – But Naturally Cautious” in 2015. He also hosts a monthly podcast recorded at the Soho Theatre with MPs, journalists and comedians entitled “Slacktivist Action Group”.
Andy is a very popular and highly entertaining Awards host.
Read More