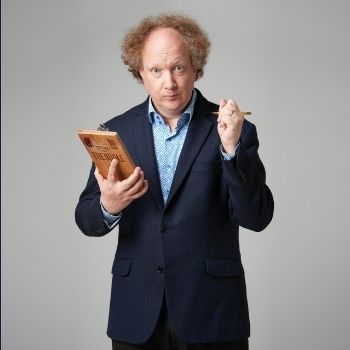 Andy Zaltzman is a stand-up comedian, broadcaster and author who has firmly established himself in the vanguard of British comedy both on TV and radio with his unique brand of political satire.

His debut full length Edinburgh Fringe show 'Andy Zaltzman versus the Dog of Doom' received a nomination for Best Newcomer at the Perrier Comedy Awards in 2001 – he then went onto co-host Political Animal, a stand-up show where different acts performed political themed material. Political Animal later transferred to BBC Radio 4 and Andy’s career on radio began.

Andy is the writer and presenter of hit satirical podcast The Bugle, one of iTunes’s biggest ever comedy podcasts. He is the current host of The News Quiz on BBC Radio4.

He also hosted Andy Zaltzman’s History of the Third Millennium, Series 1 of 100 and Political Animal and The Department, both of which he co-presented with John Oliver.

Andy has worked with Rory Bremner on a number of projects, these include Transatlantic, a US election special for BBC Radio 4 and several series of Bremner, Bird and Fortune. In June 2007 he and John Oliver were commissioned by BBC2's The Culture Show to write a mock farewell speech for departing Prime Minister Tony Blair. The speech was animated by Triffic Films, with Bremner providing Blair's voice.

He has appeared as a guest on various TV and radio programmes, including 8 Out of 10 Cats, BBC Four's The Late Edition as well as The Now Show on BBC Radio 4.

Andy’s numerous and diverse TV appearances include The Stand-Up Show (Comedy Central), 8 out of 10 Cats (Channel 4) and Unspun with Matt Forde (Dave).