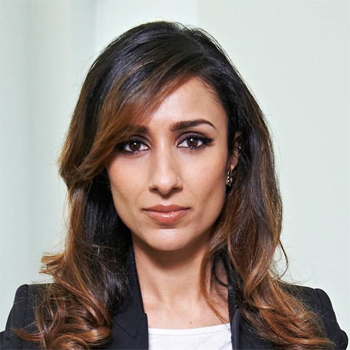 Bradford born Anita Rani developed an early interest in journalism, hosting her first show at the age of 14 on Sunrise Radio in Bradford. She went to the University of Leeds, where she studied Broadcasting and after leaving university she worked as a researcher for the BBC.
In 2002 Anita presented The Edit, a live news and entertainment programme on Channel Five. She has also presented a number of pop shows on Five including Spring Break Live, Party in the Park and Pop City Live, as well as being a freelance journalist for 5 News.
In 2003 she fronted The State We're In, a satirical current affairs programme on BBC Three. She was nominated as Best On Screen Personality at the Royal Television Society Midlands awards in 2005.
Aita Rani joined the BBC Asian Network radio station in 2005, and became presenter of the weekend Hot Breakfast show. In 2006/7 she presented the weekday morning talkback programme Anita Rani on the BBC Asian Network.
She has been a co-presenter of Desi DNA, an Arts programme on BBC Two. She was also part of the team that presented Destination Three, a late night show on BBC Three and was a regular reporter on The Cricket Show on Channel 4.
In May she joined Sky Sports where she became co-presenter with Simon Thomas on the Cricket AM show each Saturday morning.
Anita presented My Generation Next on BBC News 24 in December 2006 and covered for Anita Anand on the late evening weekday show on BBC Radio 5 Live in 2007. She has presented World Have Your Say on the BBC World Service and Weekend Breakfast on Five Live.
In 2008, she was co-presenter of Rogue Restaurants on BBC 1 and then joined the team of roving reporters on The One Show. From March 2009 she co-presented BBC1's Watchdog, succeeding Julia Bradbury.
In 2011 she presented Four Rooms and co-presented the documentary travelogue India on Four Wheels. This was followed by China on Four Wheels in 2012 and in the same year she took part in the Great Sport Relief Bake Off, winning the competition.
In 2013 Anita co-presented the unique Airport Live from Heathrow Airport, followed by Russia on Four Wheels, aired in 2014.  In 2014 she was one of the presenters of BBC Two's Escape to the Continent.  Since 2015, she has co-hosted BBC's Countryfile. She also co-presented The World's Busiest Railway 2015 on BBC2, alongside Dan Snow and Robert Llewellyn.
Between October and December 2015 Anita participated in Strictly Come Dancing and reached the semi-final.
Read More