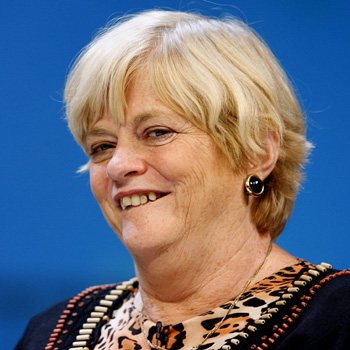 Ann was born on in Bath, Somerset in 1947. Her family moved around, following her father's work in the Navy, first to Portsmouth, then to Singapore, before returning to England.
She was educated at the Royal Naval School Singapore and La Sainte Union Convent, Bath and has two degrees; one in Latin from Birmingham University and one in Politics, Philosophy and Economics from Oxford University. At Oxford she was secretary, then treasurer of the Oxford Union, and on the committee of the Oxford University Conservative Association.
After working in marketing at Unilever from 1973 to 1975 she was a senior administrator at London University from 1975 to 1987, during which time she was a district councillor and stood as a candidate in two general elections. In 1987 she was elected Member of Parliament for Maidstone.
As an MP, Ann rose through the ranks to become Shadow Health Secretary in 1998 and Shadow Home Secretary in 1999. In July 2001 she announced her decision to retire from the Shadow Cabinet, because she wanted to be able to speak on issues which she felt strongly about without the constraints of being a Front Bencher. She also wanted to spend more time with her elderly mother and to devote more time to her writing career. Her novels include The Clematis Tree (2000), An Act of Treachery (2002), Father Figure (2005), and An Act of Peace (2005).
Her media career really took off in 2002 when she took part in ITV's Celebrity Fit Club.and in Louis Theroux's television documentary depicting her life, both in and out of politics. In 2004 she briefly became The Guardian newspaper's agony aunt and in 2005 BBC2 showed six episodes of The Widdecombe Project, an agony aunt television programme.  In 2005, she appeared in a new series of Celebrity Fit Club, but this time as a panel member dispensing wisdom and advice to the celebrities taking part.  Also in 2005, she presented the show Ann Widdecombe to the Rescue in which she acted as an agony aunt, dispensing no-nonsense advice to disputing families, couples, and others across the UK.  In 2005, she also appeared in a discussion programme on Five to discuss who had been England's greatest monarch since the Norman Conquest; her choice of monarch was Charles II.
She was a guest host on Have I Got News for You in 2006 and 2007 and fronted a television series called Ann Widdecombe Versus, on ITV1, in which she talked to various people about things related to her as an MP, with an emphasis on confronting those responsible for problems she wished to tackle.
Issues covered included prostitution, benefits and truancy. A fourth episode was screened in September 2008 in which she travelled around London and Birmingham talking to girl gangs.
In October 2010, she appeared on BBC One's Strictly Come Dancing, partnered by Anton du Beke, winning the support of some viewers despite low marks from the judges.  The couple stayed in the content for nine weeks thanks to support from the public vote. An entertaining after dinner speaker!
Read More