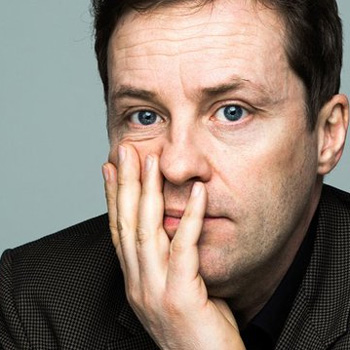 Unforgettable as the unbelievably stupid but endearing priest Father Dougal Maguire in Father Ted, Ardal O'Hanlon is also an acclaimed author and popular stand up comedian.

Born in 1965 at Carrickmacross, Monaghan, Ireland, Ardal is one of six children to Rory O'Hanlon, an Irish politician and doctor. He was educated at Blackrock College in Dublin and graduated in 1987 from the National Institute for Higher Education, Dublin (now Dublin City University) with a Degree in Communications Studies.

On completing his studies Ardal decided that he wanted to try his hand at stand up comedy. But at the time there was no real live comedy scene in Dublin so he and a group of friends established Ireland's first alternative comedy club in Dublin - The Comedy Cellar.

In 1994, he won the title of Comedy Newcomer of the Year at the Hackney Empire and was soon spotted by Graham Linehan, one of the makers of Father Ted. The rest is history and Father Dougal Maguire was born.

Ardal's part in Father Ted was followed by roles in the more serious Big Bad World and the award winning short comedy film Flying Saucer Rock'n'Roll. He also appeared in the UK version of "Whose Line is it Anyway?"

In 2000 Ardal starred in the comedy series My Hero, in which he played a superhero who juggled his world-saving duties with the crises of suburban living. He stayed in the role until early 2005 and was replaced by James Dreyfus in 2006.

He also provided the voice of the lead character in two Christmas television cartoon specials of Robbie the Reindeer. He appeared in the 2005 BBC1 sitcom Blessed, written by Ben Elton; at the 2005 British Comedy Awards it was publicly slated by Jonathan Ross, albeit in jest. Towards the end of 2005, he played an eccentric Scottish character, Coconut Tam, in The Adventures of Greyfriars Bobby.

He later appeared in the Doctor Who episode "Gridlock" broadcast in 2007, when he played a feline alien named Thomas Kincaid Brannigan.

Beyond the world of television, Ardal O'Hanlon is an accomplished writer and has written a novel, The Talk of the Town (known in the United States as Knick Knack Paddy Whack) published in 1998. The novel is about a teenage boy called Patrick Scully and his friends in strange jobs and with strange aspirations.