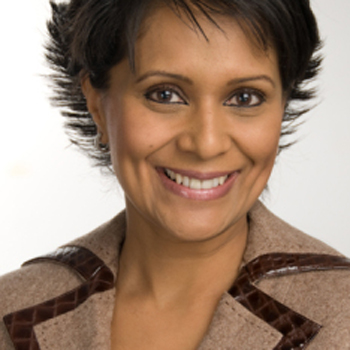 Arti Halai is an experienced television presenter, reporter and producer . She is also a media consultant and trainer both in the UK and abroad.
She has set up a number of successful businesses including a PR agency, creative design agency, consultancy and training business, to help businesses grow through the power of communications.  The Fleet Street Group works across a variety of sectors including hospitality and leisure, B2B, retail, academic and financial services.
Arti was the face of ITV1's regional news in the Midlands, for seven years, fronting Central News bulletins. She started her career at BBC Radio WM as a reporter and presenter based at Pebble Mill in Birmingham. She then moved to Mirror Group as Senior Producer where she helped set up cable station Birmingham Live, leading a team of twenty five staff and helping set the blueprint for six similar stations across the country.
Keen to get back to her creative roots she returned to Carlton presenting Spotlight Asia, a weekly half-hour show looking at issues affecting the Asian community in the Midlands.
Moving to London she worked as a reporter for the new London Weekend current affairs programme, 7 Days. She had a broad remit, covering everything from the Commission for Racial Equality (CRE)  to the European Parliament, the regeneration of the South Bank, previews of the Tate Modern and the London Eye and interviews with Sir Richard Attenborough and Salman Rushdie.
She then went freelance, before becoming a presenter for ITV1.
Arti is an experienced host and presenter at live events, from award ceremonies and annual dinners to fundraisers. She is also in demand to chair panels at conferences and business breakfast seminars.
As a guest speaker, Arti delivers motivational talks on personal effectiveness and raising profile by creating a positive mindset and strong, succinct messages that empower and lead others to achieve results.  Her first book, 'Positivity' was published by The HotHive in 2009.
Read More