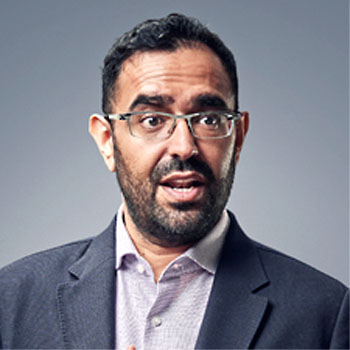 Azeem Azhar is on a mission to explain how our societies and ways of life will change under the force of exponential technologies. He is determined to bring together the two cultures of innovation and tech and of business, society and policy and help us understand the real implications of the changes we are witnessing.

He does this from the vantage point of over 25-years career as an entrepreneur, investor and analyst in the tech industry.

Today, he runs the highly-cited newsletter, ExponentialView, is a sought-after advisor to boards, an international keynote speaker and active early-stage investor.

Exponential View covers the societal implications of technology and is a totemic source for the investors, entrepreneurs, senior leaders and policy-makers. Exponential View has 187,000 subscribers via Substack and LinkedIn.

In addition, Azeem hosts the Exponential View podcast, distributed by Harvard Business Review. This is a top ten podcast in technology in the UK and top 50 in the US. His guests have included Prime Minister Tony Blair, Yuval Harari, Reid Hoffman, Elif Shafak, Stuart Russell, Andrew Ng, Mariana Mazzucato and many others. It is a unique forum which sits convenes experts from the worlds of science, culture, politics, economics, technology, innovation and business.

Exponential View has been lauded by publications like The Times, Wired, Fast Company and others. His first book will be published in summer of 2021.

Azeem was up to July 2020 senior advisor to professional services firm, PwC and prior to that senior AI advisor to the CTO Accenture. He also advises breakthrough entrepreneurial firms, including Kindred Capital, Onfido, Ocean Protocol, ReInfer and quantum-computing startup, Beit. He is an investor in early-stage startups in AI, renewable energy, female healthtech, self-driving cars and marketplace. He is a trustee of the Ada Lovelace Foundation, an independent research entity focused on AI ethics. He sits on the Global Futures Council for the Digital Economy and Society for the World Economic Forum.

Previously, he’s been an award-winning entrepreneur founding the VC-backed, PeerIndex, which was acquired in 2014. He’s also invested in more than 30 startups, with exits to Microsoft & Amazon, amongst others. The early part of Azeem’s career took him to journalism, where he covered technology at The Guardian and The Economist. Azeem has also had strategy and innovation roles at the BBC and Thomson Reuters, and was on a non-executive board at Ofcom, the UK’s converged communications regulator.

In addition, Azeem is a LinkedIn Influencer with 425,000 followers and more than 35,600 followers on Twitter.

He lives in London with his wife and three kids.

In December 2019, Azeem’s podcast was listed in the Times as one of the best business podcasts in the UK. Azeem's recent article Trends Preparing for 2030 - https://www.exponentialview.co/p/-preparing-for-2030-251 has received eminent acclaim from senior business leaders globally.

I love the way Exponential View carefully brings together and celebrates many different perspectives, and I look forward to being challenged and inspired by it every week.

Exponential View is a must read and always provides a thoughtful perspective on our exponential world.

While populist politicians lower the standards of public discourse and cynically ignore science and shun data-driven debate, Azeem reminds us each week in Exponential View what the curious mind can learn.

The juiciest source I know for what’s new in the world of artificial intelligence, biotech, and the near future.

Still blown away by Azeem's newsletter. Excellent and useful aggregation of AI and 'exponential tech' news.

Azeem's talk on the the impact of artificial intelligence on humanity was a captivating blend of history, philosophy and technology.

Azeem Azhar is the Founder and author of Exponential View which concentrates primarily on technology, business models, the political economy and society. Azeem is also on the board of the Ada Lovelace Foundation, the leading independent research institute focussed on the ethics of AI. He is a venture partner at Kindred Capital, a generalist early stage VC fund, and an advisor to Fabric Ventures, a blockchain-focused VC fund. He is a member of the World Economic Forum's Global Future's Council on the Digital Economy and Society.