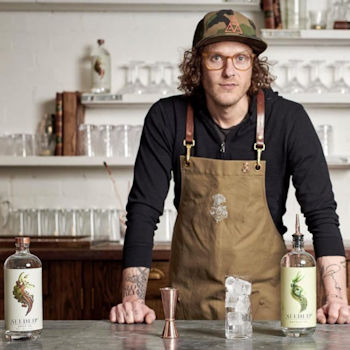 Ben Branson is an entrepreneur, and founder of Seedlip, the world's first distilled non-alcoholic spirits. His story is one of innovation and rapid growth, resulting in the sale of a majority stake to Diageo in just 4 years...not bad for someone who ran a design agency and was simply tinkering at home!

Over 300 years ago, it was common for physicians to distill herbal remedies using copper stills, harnessing the power of nature & alchemy to solve medical maladies. In 1651, one such physician, John French, published The Art of Distillation, documenting these non-alcoholic recipes. At that same time, a family in Lincolnshire had started farming, hand-sowing seeds using baskets called ‘seedlips’.

Centuries later, Ben stumbled upon John French’s recipes. Ever the tinkerer, he was inspired to purchase a small copper still and experiment with distilling herbs grown in his garden at home.

A few months later, while dining at an upscale London restaurant, Ben ordered a non-alcoholic cocktail. To his dismay, he was served a pink, sugary drink that neither paired with the meal, nor the atmosphere.

And so began two meticulous years of perfecting the world’s first non-alcoholic spirit–combining Ben’s farming heritage, love of nature & design, and fulfilling the need for a sophisticated non-alcoholic option.

Those years resulted in the development of Seedlip’s bespoke, six-week maceration, distillation, filtration, and blending process–for which each individual botanical ingredient is distilled separately, before blending. This process results in a liquid devoid of alcohol and sugar.

Ben launched Seedlip Spice 94 in London’s Selfridges on November 4th, 2015. His first handmade 1,000 bottles sold out within three weeks, the second thousand in three days, and the third in 30 minutes online. They quickly established offices in Los Angeles and Sydney and even published a Cocktail Book with Penguin and won two gold medals at RHS Chelsea Flower Show!

Seedlip has pioneered the ever-growing no & low alcohol category, and which has become a segment of its own. The original blend has been joined by Seedlip Garden a herbal expression and a citrus expression, Seedlip Grove 42. What began in a kitchen in the woods is now leading a worldwide revolution–changing the way we drink, with Seedlip stocked by the world’s best bars, restaurants, hotels and retailers across the globe.

Ben has done over 2000 talks in over 20 countries discussing Entrepreneurship, Nature, Flavour & Design for clients such as Diageo, Coca Cola and Nestle. He appears widely in the press having been featured in the likes of Wired, Monocle, BBC News and the New York Times.