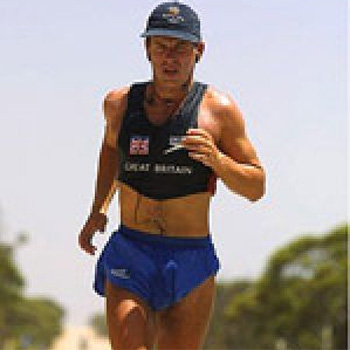 Bob Brown is an ultra distance runner. In 2004 he won the "Run Across America" which is a 3100 mile run from Huntington Beach, California on the West coast to New York on the east completed in 71 days (that's the equivalent of running 2 marathons a day for 71 days!). This follows coming 7th in the 2001 Trans-Australia Footrace in which he ran 50 miles per day for 65 days in the middle of the Australian summer (The heat was 50c at times).

Before turning to running full time, Bob was a primary school teacher from Cornwall. Throughout the 90s he took part in Iron Man competitions and in '95 took part in his first ultra distance triathlon (7.2 mile swim, 336 mile cycle, 78 mile run) and came second. The following year he came sixth (he admits he over trained beforehand) and in '97 entered what is considered to be the toughest race on the planet: World Deca-Ironman Championships in Monterrey, Mexico. This consisted of a 24 mile swim, 1120 mile cycle ride followed by a 262 mile run.

The race almost killed him, and due to sleep deprivation and an overdose of painkillers took a long time to get over both physically and mentally. 18 months later however he was back, breaking the record for cycling between Landsend and John O'Groats and back and then entering the Trans-Australia footrace.

Since completing Run Across America, Bob has appeared in the media on both sides of the Atlantic, and was honoured on comedy quiz show "They think it's all over" as the "feelie sportsman". He is in demand on the international speaker circuit, sharing his extraordinary experiences and providing inspiration to people that you really can achieve anything you like. As he puts it "Everyone is good at something. Too many people don't take time to try and see what they are good at. I was pretty average as a youngster. Yet I always knew I would achieve a lot in my life. Take time to find out what you are good at. You never know what it will lead".