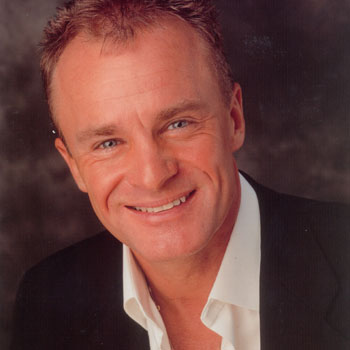 Bobby Davro made his TV debut in 1981, but his major breakthrough came with an appearance in 'Live At Her Majesty's' in 1983.

This led to his own Saturday night series 'Bobby Davro On The Box' and 'Bobby's Sketch Pad TV Weekly' which immediately topped the ratings for six consecutive years.

In 1991 Bobby moved to the BBC and made three series, 'Public Enemy Number One', 'Rock With Laughter' and 'Run The Risk'.

He returned to our screens in 1997 as host of Yorkshire Television's 'Winner Takes All' for 65 programmes.

He has starred in Channel Four's 'The Games' and has guested on Living TV's 'Loose Lips', a magazine programme hosted by Melinda Messenger. He is also a regular contributor to a variety of programmes across the TV networks, and has appeared in BBC 1's long standing soap 'EastEnders'.

Versatility is the key to Bobby's longevity, as a high profile personality. Be it in Televsion, Pantomime, Summer Shows,. Corporate Entertainment and Awards Presentations, Golf Shows and Late Night Cabaret.  He is in constant demand as a major attraction.
In his rare moments away from the world of show business, Bobby likes nothing better than a game of golf ( He plays off a handicap of 11), a game of snooker, a spot of fishing, or a glass of Chardonnay in front of the telly.
"Bobby was fantastic.  He entertained the room the whole night.  He engaged with the audience and entertained them all night with his humour, impressions and singing.  It was an amazing night.  The feedback and comments were great, people were saying Bobby had made the night.  All in all a fantastic, enjoyable evening, with an amazing fund raising total at the end."  Selco Supplier Conference - March 2015
"In a nutshell, Bobby Davro is brilliant and a real pleasure to work with. The audience loved him. He caught the mood perfectly and was genuinely funny and entertaining. He's also a truly nice person. Warm, friendly and a real gentleman."  Foodservice Packaging Association Awards - March 2013
"Bobby was fabulous. Thank you very much! A really nice guy, very easy to work with and gave a very entertaining performance!! Lots of great feedback so please pass on our thanks to Bobby."  AFM Gala Dinner for Trinity Events - November 2011
Read More