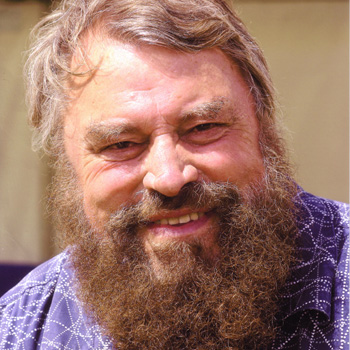 The son of a South Yorkshire coal miner, Brian Blessed OBE was born in 1936 in Mexborough and grew up in the mining village of Goldthorpe. He trained at the Bristol Old Vic Theatre School before beginning a distinguished and varied career, which has encompassed all media. Brian is now one of this country's best known and most highly respected actors.

Brian created the role of Old Deuteronomy in Andrew Lloyd Webber's highly successful musical, 'CATS', for which he received a SWET nomination. He also starred as John Freeman in the West End musical 'METROPOLIS'. Whilst a member of the Royal Shakespeare Company he played Claudius in 'HAMLET', Exeter in 'HENRY V' and Hastings in 'RICHARD III'. At the Royal National Theatre he created Maxim Gorky in Robert Bolt's 'STATE OF REVOLUTION'. He has also played Henry II in 'THE LION IN WINTER'.

Countless television roles include: Augustus Caesar in 'I CLAUDIUS' for which he received the New York Critics Award; PC Fancy Smith in 'Z CARS'; Porthos in 'THE THREE MUSKETEERS'; Pepone in 'THE LITTLE WORLD OF DON CAMILLO'; Spiro in 'MY FAMILY AND OTHER ANIMALS'; the title role in 'THE JOY OF BACH'; Richard IV in 'BLACK ADDER' and the larger than life Squire Western in the BBC's classic drama series 'TOM JONES'

On Film, Brian played Talthybius in 'TROJAN WOMEN' in which he was thrilled to co-star with Katherine Hepburn, Irene Papas and Vanessa Redgrave. He played Vultan in the ever popular 'FLASH GORDON'; Pedro in 'MAN OF LA MANCHA'; Long John Silver in 'RETURN TO TREASURE ISLAND'; General Zukov in 'WAR AND REMEMBRANCE' and Lord Locksley in 'ROBIN HOOD - PRINCE OF THIEVES' with Kevin Costner and Alan Rickman. In Kenneth Branagh's 'HENRY V' he played Exeter; in 'MUCH ADO ABOUT NOTHING' he played Antonio and in 'HAMLET' he played Hamlet's Father and the Ghost.

Brian has worked with some of this country's great orchestras. At the Royal Festival Hall he appeared with The London Symphony Orchestra and massed choirs performing Arthur Bliss' 'MORNING HEROES'. He followed this with the inevitable 'PETER AND THE WOLF' with the Bolshoi Symphony Orchestra in Birmingham, Prokofiev's 'IVAN THE TERRIBLE' with the Royal National Scottish Orchestra in Glasgow and he has recorded 'A YOUNG PERSONS GUIDE TO THE ORCHESTRA'.

Brian has published nine books including Nothing’s Impossible and Blessed Everest, which was born from his love of mountaineering and his insatiable desire to stand on ‘the top of the world'.

Brian has also completed a trek to the North Pole, an expedition to The Lost World in Venezuela, a climb to the summit of Mount Ararat in Turkey at 17,000 feet and has climbed Mount Kinabalu in Malaysia. There is no stopping Brian’s adventurous side, next on his agenda is to travel into space.

Since the late sixties Brian has had a great love of mountaineering and a great desire to stand on 'the top of the world'. He has been on three expeditions to Mount Everest. The first to make the film 'GALAHAD OF EVEREST', a tribute to George Leigh Mallory. In 1993 he returned to Everest, this time to climb the Southern side where he reached a height of 28,000 feet - the highest a man of his age has achieved without oxygen. He returned to the Northern side  when the climb was filmed by a Channel 4 Television team as part of the 'ENCOUNTERS' series. Brian has also completed a trek to the North Pole resulting in him currently being the oldest man to reach the pole, and an expedition to The Lost World in Venezuela - the subject of his last book.

He has also completed several a highly successful UK Tours with his one-man show 'AN EVENING WITH BRIAN BLESSED' and is sought after on the corporate market, either as an entertaining raconteur, or sharing his inspiring story of ascending Everest.