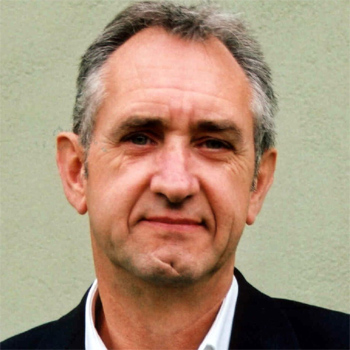 Brian was born and bred in Doncaster, which is a quaint fishing village on the outskirts of Barnsley.  Upon telling the careers master that he had half a mind to work for the Coal Board he received the reply..."That should be more than adequate".
During a life sentence as an engineer at British Coal, he developed a warped sense of humour and perfected the art of becoming invisible in the afternoon.
He is very well known on the circuit as "The Man from the Coal Board" and has entertained the full spectrum of organisations from The Royal Variety Club to The Institute of Funeral Directors! He has shared the stage with many celebrities, sportsmen and even Members of Parliament, ranging from Status Quo to Sir Bobby Robson, and Jack Charlton to Austen Mitchell.
Since 1989 Brian has worked all over the UK and overseas, and as well as hundreds of golf clubs, Sporting and corporate dinners, his work includes everything from Awards Ceremonies and product launches, to cabaret on cruise liners, to live commentary at air shows.
In his spare time Brian enjoys tinkering with cars and motorbikes and loves flying light aircraft, although he admits a near-fatal collision with power cables a few years ago did dampen his enthusiasm for a while!
His material is suitable for all occasions and he will personalise his speech to suit your needs.  (He always likes to give the Chairman a mention!)
An Irish mother and a lifetime at British Coal have given Brian a unique sense of humour, which makes him the ideal man to round off your next social, sporting or corporate event with a laugh. Brian has also entertained at many golf  clubs and corporate golf events throughout the UK, including The Belfry and The Royal Birkdale.
"Brian Newbold brought the event to a close. Laughter filled the room and the audience was clamouring for more."   BAPC Annual Conference - January 2014
"We were most impressed with Brian's preparation for and the delivery of his performance. Well versed in the idiosyncrasies of the area, the people and his hosts, Brian delivered a polished performance that had his audience belly laughing from start to finish. Few people manage to completely hold the attention of a large and predominantly male audience that has enjoyed a good meal and liberal refreshment, but Brian did just that.  His performance rounded off an excellent evening."  Chairman, Institute of Measurement & Control, Teesside - March 2012
Highly entertaining and polished performance  Wing Commander, RAF Brize Norton
He hit exactly the right note for a formal function with ladies present  Chairman R.I.C.S. Lincs
This was the first time I have attended a dinner where there has been what amounted to a standing ovation for the 'After Dinner Speaker  Chairman of The Institute of Measurement and Control
A brilliant performance-without a doubt one of the best evening's entertainment we have ever had. Captain, Hull Golf Club
Read More