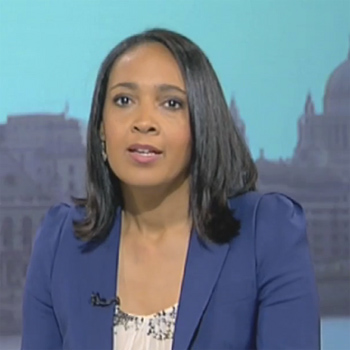 Bridgid Nzekwu is an award-winning television news journalist with 15 years' experience reporting and presenting national news, current affairs and factual entertainment on British television.
She started out as a producer on The Big Breakfast on Channel 4 in 1997, then went on to become an established face of Channel 4 News, reporting and presenting the news programme from 1999-2011.
From 2007-2009 Bridgid was Channel 4 News money reporter, covering stories on personal finance, business and economics during the financial crisis.
As well as Channel 4 News Bridgid has presented many of the UK's leading national news programmes, including ITV News, 5 News and More4 News.  She has also presented 24-hour rolling news (for the ITN Newschannel) and she is also the face of online news for Amnesty International.
Bridgid is much in demand as a presenter of other programmes. Given her specialist interest in health she was the ideal presenter for Embarrassing Bodies Live, a three-part series of health discussion programmes, streamed live online at channel4.com in 2010.  She was also the series presenter of Save Money!, a five-part series of programmes for Teachers TV in 2007/8.
She has been shortlisted and has won awards including:
2009 Finalist, Business Journalist of the Year
2008 Special Commendation, Personal Finance Awards
2008 Best Personal Finance Programme, Personal Finance Awards
2006 Shortlisted for the Mental Health programme category in the Media Awards
Health is one of Bridgid's particular interests and she has written about her own experiences of cancer treatment and surgery for The Sunday Times (2013).  She is also passionate about cars, motor sport and handbags.
Read More