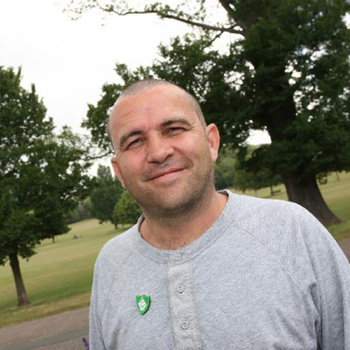 In 1984 Chris started work as an apprentice gardener with Brighton parks department.  Five years later he began his horticultural studies at the Royal Botanical Gardens in Edinburgh, equipping him with a practical and scientific background that the complex subject of horticulture requires.

Following this his adventures began, working in Cameroon at the Limbe Botanic Garden,  reconstructing  these  historical  gardens (the oldest in Africa) and also carrying out rainforest inventory work on Mount Cameroon. Within weeks of returning from Africa a chance to work in Japan materialised and for the next four years Chris worked in both a practical and consultancy capacity, importing British horticultural goods, teaching British gardening methods and designing and building gardens.

Five years later Chris returned to the UK and worked in the South Arboretum at the Royal Botanic Gardens in Kew before moving on to be head gardener at Westminster Abbey.

In 2002 Chris entered the world of television and media and secured his own television series on BBC2 called  'The Plantsman'. Since then he has appeared a variety of TV programmes including The Chelsea Flower Show, Hampton Court Flower Show, Gardeners World, This Morning, Castle in the Country, Garden Invaders,  BBC Breakfast, Digging for Victory, GMTV, A Garden for London, Garden Rival, Secret Gardens, Hard Sell, Garden Challenge and Turf Wars.

He was the resident Blue Peter gardener, working both on screen with the presenters and keeping an eye on one of the country's favourite gardens.

In 2007 Chris was awarded the Duke of Edinburgh medal for his services to horticulture and he was part of the team that won a silver medal at Chelsea in 2010 with 'The Garden That Kids Really Want'.