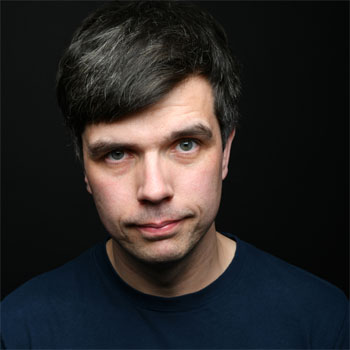 Hailing from Cork Chris gave up the day job as an electrician to pursue his calling in comedy. He emerged onto the Irish comedy scene in 2009 after winning the Bulmers Nuttin’ But Funny competition.

In 2010 Chris made his debut at one of Ireland’s biggest comedy festivals in Dublin’s Iveagh Gardens. His compelling storytelling then went on to win him the Comedy Smack Down Award at the Galway Comedy Festival later that year.
He quickly established himself on the Irish circuit and became sought out to open for some of his favourite acts, including Dylan Moran, David O’ Doherty, PJ Gallagher and Neil Delamare to name but a few.

In 2012 Chris was listed as “One To Watch” in The Dubliner Magazine’s Red Hot and Rising and went on to make his debut at the prestigious Cat Laughs festival in Kilkenny.

In August, Chris brought his first solo show ‘Plugged In’ (‘Breathes new life into anecdotal comedy’ -The List, ★★★★ Cream of the Fringe) to the Edinburgh Festival, where he fell ill after contracting the mumps. This was initially diagnosed as ‘just Edinburgh’ by fellow comedians. However, the large lump on his face was later confirmed as a genuine illness, and not simply ‘all in his head’. He had to cancel two shows to avoid creating an epidemic, although he’s not sure anybody noticed…

Chris returned to Ireland with broken dreams but mump free, to take up his seat on RTE Radio 1’s comedy panel show The Second Republic, alongside PJ Gallagher and Neil Delamare.

After a tough debut year, which he put down to “everybody in the world being in London for the Olympics”, Chris was determined to return to Edinburgh fighting. 2013 saw him perform his second solo show ‘Second Fix’ with a full bill of health and much healthier crowd numbers. This time he only had to cancel one show due to a delayed flight, and was delighted that people did notice (albeit being a bit annoyed at him).
He returned home that year, after a much happier Edinburgh experience, with a new UK agent.

In December, Chris was chosen to support Bill Burr in Vicar Street, on his only Irish date that year. He made his Irish television debut on New Years Eve as a panelist on RTE’s Next Year’s News.

In 2014 Chris took part in an Irish documentary The Stand Ups, which followed the lives of five Irish comedians. This gave a behind the scenes glimpse into the everyday life of a comedian, and followed Chris as he prepared for his third Edinburgh solo show ‘Corked’. ‘Fresh and original material, extremely endearing performer’ ★★★★ Broadway Baby. ★★★★ Threeweeks.

In 2015 Chris made his UK TV debut on Russell Howard’s Stand Up Central. Shortly afterwards, he moved to the UK to try and establish himself on the UK comedy scene, where he has quickly become a favourite at some of the top clubs.

He brought his fourth solo show ‘Stop Stalling’ (‘Original, hilarious material, Among the best acts I’ve seen ★★★★★ The Mirror) to the Edinburgh Festival.
He returned home after once again miscalculating his final shop and leaving behind half a bottle of shower gel and a box of cornflakes (unopened), and taking with him only resentment for the landlord that charged seven times the rent for an apartment that couldn’t possibly have been up any more stairs…

In 2016 Chris performed at the Perth Fringe. It was warm. He took a break from Edinburgh, assuming that “everybody in the world would be in Rio for the Olympics” and to welcome his first child into the world. He did, however, go on to do his first Irish tour with ‘Stop Stalling’, performing to sell out crowds. It was cold.

In 2017 Chris returned to the Edinburgh Fringe with his fifth show, ‘Moving On’. He also made his acting debut appearing in the BBC hit sitcom, ‘The Young Offenders’ as Conor’s Dad.

2018 saw Chris bring ‘Moving On‘ on tour around Ireland and included his biggest solo show to date at The Everyman Theatre, Cork. He then took on another acting role when he played Com in RTE’s ‘Women on the Verge‘. In August of 2018 he returned to the Edinburgh Fringe with his sixth solo show, ‘Looking Up‘.

He went on to bring ‘Looking Up‘ on tour around Ireland in the Spring of 2019 where he recorded his first live special in front of a sold out crowd at Cork’s Everyman Theatre. He then went on to open for Jim Gaffigan in Vicar Street, Dublin, later that year. He returned to Edinburgh to do a week of work in progress shows, ducking out of the full run to become a Dad for the second time.

In January 2020, Chris returned to the Perth Fringe to work on his seventh show, ‘Christy Doesn’t Live Here’.