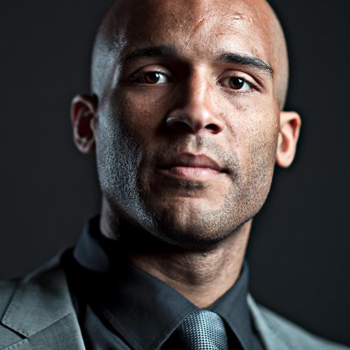 Clarke Carlisle is considered to be one of the smartest, former professional footballers having won the title of Britain's brainiest footballer as well as appearing on three episodes of Channel 4's prime time quiz show Countdown.
Clarke is in high demand by the media. He is fast developing a reputation as an engaging and insightful football analyst, having worked as a pitchside reporter for Sky Sports, ESPN as well as appearing on the Match of the Day 2 sofa.
Clarke made his debut for Blackpool in September 1997 before moving to Queens Park Rangers in 2000. He then had spells at Leeds United and Watford before joining Burnley. In 2000 Clarke was selected by Howard Wilkinson and won three caps for the England under-21s
Clarke has experienced the very highs of professional sport. He has won promotion with both Blackpool and Burnley, represented his country and has played at the home of English football Wembley Stadium. However, in 2001 Clarke suffered a posterior cruciate ligament injury which sidelined him for a year, nearly ending his career. During this time Clarke battled alcohol addiction and had stints in rehab. His strength of character and determination led Clarke to return a stronger, more focused individual, establishing himself as a highly respected player and football expert.
Clarke regularly gives talks to students and he is an ambassador for the Premier League's Kick It Out Campaign which promotes inclusion and equality in football. He is also a member of the Management Committee of the PFA.
Read More