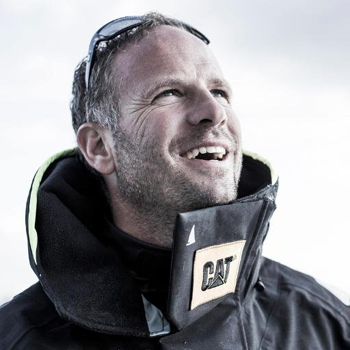 Conrad Humphreys is an inspirational team leader and world-class British yachtsman. He has had a lifetime of adventure and achievement, enduring some of the most hostile oceans of the world and has raced around the world in three different races.
From his early days and throughout his career, Conrad has shown his vision and ability to lead and inspire teams. He was just 28 when he led his team 'LG Flatron' to victory in the BT Global Challenge.
Conrad attributes this success to the winning attitude cultivated within the team, his driving philosophies being winning is infectious and self-belief is everything.  The book Inspiring Leadership : Staying Afloat in Turbulent Times was based on the research from this race, and Conrad's leadership style is referred to throughout the publication.

Conrad's ambition did not stop there. In 2004 he built a campaign with the global communications company Motorola, to compete in the non-stop single-handed round-the-world Vendée Globe yacht race. Many thought his race was over when his yacht's rudder was broken following a collision with a floating object in the water, however Conrad's single-minded determination saw him make his way back up the fleet, finishing 7th after 104 days racing alone at sea, making him only the 5th British sailor in history to complete the legendary race. His story has been described as one of the most remarkable comebacks in the history of the event.

Conrad is an exceptionally talented speaker and uses the richness of his experiences from his three round-the-world yacht races to captivate his audience. He clearly articulates the challenges of leading teams through some of the most hostile conditions on the planet, and carefully draws out some thought-provoking lessons from his many experiences.  Conrad takes a lot of pride in his delivery and works with every client to tailor his speech. He is also very happy to spend time with his audiences responding to questions.  His presentations are brought to life with fantastic images and footage and are focused around :

On television Conrad had provided commentary for the BBC; live interviews for Sky News; and has appeared on Big Brother's Little Brother as a leadership expert.  He features in a number of publications, including Extreme Sail and Champions for Change- Athletes Making a World of Difference. Conrad's enthralling Vendée Globe Solo Round the World race is also documented in the film Against The Odds.

A director of Sport Environment, Conrad's passion for the natural environment has taken him all over the world and in 2007 he founded the Blue® Climate and Oceans Project, a social enterprise which harnesses the popularity of adventure sports to encourage people to actively contribute to the health of our planet.

He is also comfortable and experienced delivering all his topics virtually and as webinars.

If you'd like to watch Conrad’s current keynote on “Dealing with Isolation and leading remotely – insights from triple round the world yachtsman” check it out on our Speaker Taster Sessions page here: https://www.performingartistes.co.uk/podcast-post/6